Two reports in quick succession. It was my fault as I was a bit slack in getting the previous turn up on time. Anyway, here's the latest write up of our forays into the northern realms of Neame... 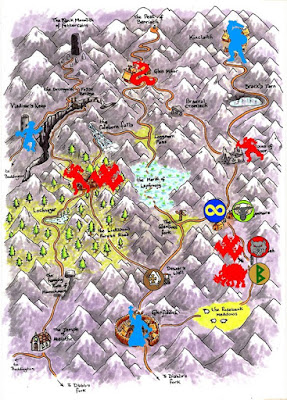 Bash pondered, "Alas, my hearing fades due to my toils as a campen… campo… camper. - Bell ringer! I would face those bats with my hearing of old as I could listen to their cries and use my Holy Magic to confuddle them into flying against each other. I have an almighty thirst to quench and will return to the well. I wonder if some brave soul will join me and vanquish the foes beyond Linkwood?"

Footsore and tired, Kenny the Fighter and Secundus the Mage arrived at the remote, mountain village of Cragganmore. They were greeted coldly with the suspicion-loaded glances of nervous crofters.
Secundus turned to Kenny, “I fear’ poor travelers such as we can expect little hospitality here.”
Kenny nodded solemnly and looked southwards to where, beyond the mountains an evil presence lurked.

With blood-bats fluttering high above them, Onan the Barbarian and Strepos the Ranger picked their way cautiously along the interweaving animal trails surrounding Grant’s Gibbet. The Ranger’s keen eyes flitted purposefully between the darting bats, but they were too high and flying too erratically to hazard an arrow and risk being helpless for even a moment.
With a crash, Black Tusk the boar burst from the bracken. An arrow whistling past his ear, Onan brought his broad axe-blade down, instantly covering his loins from the spite of the dark, savage tusks. The boar’s skull slammed hard against the stern steel, hurling both beast and barbarian tumbling apart with the shattering impact of the charge. Onan unharmed, rolled dizzily and thudded to a halt, his ears ringing, nay hissing with the shock. He looked up and then he realised. His eyes narrowed, for above him, its gaze cold, its long, needle-like fangs naked but for the shimmering jewels of burning venom, the snake drew back to strike. With a steel-spring crack, the deathblow came. Onan winced and twisted his dagger transfixing the serpent’s baleful jaws from the puncture in its soft under-scales to where the blade-point stood, stark as a crimson horn crowning its broken skull. The snake’s baleful eyes turned misty white and Onan’s arm was washed with a sudden gush of gelid blood.
The big snake was dead, but the fight was far from over.