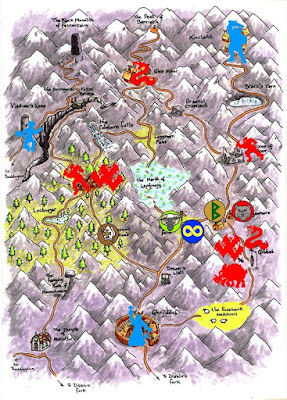 The Sun broke over the mountains, warming the night-chilled bones of Strepos the Ranger still standing his own sentinel on the high beam of Grant’s gibbet. He waited until the sun had climbed higher, banishing the shadows from the dusty ground way beneath his feet. He leapt down. Then rising to a crouch, he bid his silent companion goodbye and wary of wild animals, made his way north to where his services were direly needed.

As the rising sun cast fingers of gentle light through the branches, Bash the Cleric, with a hymn on his lips, was climbing the winding road through the Linkwood Forest. Soon he realised the chattering accompaniment of the woodland finches had ceased. Something malevolent lurked in the forest ahead. This time Bash was prepared. More cautiously, holding his staff before him, his voice still clearly cleaving the silence, he advanced.
A long howl echoed among the tree trunks and from each side the wild wolves charged. Driving his staff firmly into the ground, Bash calmly drew a small, glass flask from his rope belt. With the water within glittering like crystal in the sunlight, he gave a final blessing and threw the tiny vessel high into the air. The wolves, their tongues lolling hungrily, their teeth bared, bore down upon the lone cleric. Bash turned and bellowed, calling on the blessed power of all that is good and holy. Above him the glass shattered, spreading an opalescent mist, glistening like a thousand rainbows and falling in a kaleidoscopic cloud down through the outstretched branches as if through empty air, down upon the charging wolves. Instantly the wolves’ angry howls twisted, contorting to cries of agony, their eyes burning, their mouths foaming and their spines bending back further and further until their bones cracked and their screams fell to silence.
Bash the Cleric thanked the holy light and began the task of skinning his defeated foes for their valuable pelts.

Spitting in disgust, Onan the Barbarian gave up his search. The lone cutthroat could wait to become better acquainted with his axe, for in the valley below a more urgent meeting beckoned.
With the speed of a wild stallion, with the grace of a mountain cat, Onan raced towards the woe-beset village of Cragganmore. Sweating hard beneath his wolf pelts his rage began to stir, rising fast. His vision narrowed until the tawny hills shone angry red in his unfettered wrath, and at last, roaring like a frenzied lion, his steel claws drawn in fury, Onan the Barbarian pitched into the village, lusting for blood.
The goblins cursed, dropped their quarry and jumped clear to draw their barbed, serrated swords, when suddenly an arrow struck. A goblin screamed, clawing at the shaft impaling his black, bloody throat, its head dark with death. Already, running, Strepos the Ranger sent another shaft screeching through the death-laden air. Shocked, the goblins turned, but Onan, wracked with anger was upon them, his axe flaying wildly, cleaving, carving flesh and tearing bones clean from their sockets amidst a storm of arrows felling the feral night-brood struggling in a mass about him.
At last the last goblin fell, twice over fatally maimed. Onan tore his axe clear from the goblin’s arrow-skewered corpse. “By Frigg, we have done well here today!”
“In battle maybe,” replied Strepos, “but the pickings are meager, we have but one gold piece between us, here, you toss!”
Onan did the honours, but lost and the coin was returned to the ranger’s wiry hand.
Tia Maria, dishevelled but still the most comely of maids, stirred and cast her grateful eyes upon her heroic deliverers. The townsfolk rushed from their houses, cheering. Their gratitude was great, but not as great or as complete as that of the rescued wench.
“Phew!” exclaimed Strepos the Ranger, “and this morning I thought I’d only be roasting a boar!”