I had a very productive week this week. Loads of figures were completed on the painting side but I had a bit of bad luck. The spray varnish I have decided to give up the ghost halfway through spraying some figures, leaving them half done. The problem is that the spray mechanism had died but the can is still at least half full. I tried everything to unplug the blockage but with no joy. I have had to order another can, so will be able to finish the minis off during the week when the new can arrives. 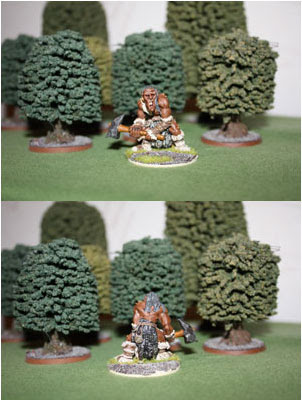 Anyway, here's one I actually did manage to complete. It is an old Grenadier War Troll. I absolutely love the way the mini conveys the power of this individual. I now have three trolls completed - more than enough for a little skirmish band. Apologies for the small size of the images but I wanted to convey the size of the mini compared to the Games Workshop trees.
I also managed to finish off a batch of female villagers and the last of the Bugman's Dwarf Rangers for Hordes of the Things, but was stymied from getting them onto the site due to the varnish issue. I'll try to get them up during the week.
My son, Alex, also managed to complete a unit of Bretonnian archers and a couple of my old Citadel fighter figures (some of the first slotta-based ones) that I had in double. I wil get these up on this site too when the varnish is through.
Posted by Little Odo at 21:04