Here's a shot of the rest of the farmer figures I have. They are from the civilians range by Gripping Beast. They are designated as shepherds, peasants and stockmen. I think they are wonderfully sculpted and take the paint very easily. 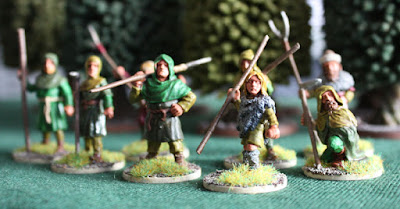 I guess that now I have the stockmen and shepherds, I will need to get some livestock. Gripping Beast have plenty of old breeds of farm animals in stock and Foundry have some nice, woolly sheep to buy by the flock.

Although I have painted many minis since I started this blog (which was the aim initially), I feel I have really only been tinkering around the edges with my collection. I need to really get a theme going and finish enough of one genre to create enough minis to stage a few games. Now that I have finished loads of Roman legionaries and a unit of auxiliary cavalry I need an opposing army. Whilst I still have a few other sets of minis on the paint station, I am going to start on some Celt minis soon - adversaries for the Romans. Once I have a few dozen of those completed I will see about getting a few games played and written up.

There are still hundreds of old 1980s minis and Warlord Games' Romans and Celts to be sorted out, and that's before starting on all of the Games Workshop Lord of the Rings figures. To finish off with, I have some Confrontation and Brigade Miniatures stuff to sort out. Loads to do and look forward to over the next couple of years methinks. I just hope I can keep the enthusiasm up to complete a small unit of five or six minis per week.

Gaming wise, there is the current pbm RPG - Tavern Knights of Legend and an upcoming strategy pbm. Once small armies of minis are completed, I will start to play Hordes of the Things and LotR:SBG.
Posted by Little Odo at 20:08