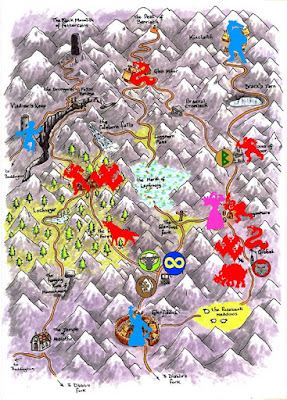 “My,” gasped Bash the Cleric, “This is thirsty work! Me thinks it is time I went to Dewar’s Well to quench the fire in my throat and collect water to bless!” Slowly he backed along the winding forest road, keeping the wolves at bay with his sturdy staff, until finally, where the trees thinned to bramble, he was beyond their dominion. They sat watching and as he turned the black hills echoed with their mocking howls.

“Hmm,” mused Secundus the Mage, “perhaps we should set out for Dewar's Well immediately. If the tree of us are unlucky enough to be ambushed,” he paused and ran his fingers through his lustrous beard, “for I predict Bash will prefer the risk of ambush in Dewar's Well to near certain death fighting wolves in the dark,” he watched the Blue Nunn relax once more, “we should be able to prevail and Tia Maria should not have to wait longer than necessary for our rescue party!”
Torchlight flared suddenly from the darkness deep behind Kenny the Fighter’s eyes, for the plight that awaited the maid of Cragganmore was not to him too distant from that which befell his dear sister. “To deliver salvation,” he attested, “is sweeter than to serve revenge, and revenge I aver, can wait!”
With that, the two men stood and with a blessing from the Blue Nunn speeding their departure, they left their cups and ventured into the night.

Limned in moonlight and agile as a cat, Sirrus the cutthroat crept through the tumbled, age-worn walls off Edradour. His eyes burning with malevolent fire were fixed on the broad-thewed back of Onan the Barbarian. Closer he crept, his long blade naked, glinting venomously in the moonlight. He thrust. Suddenly Onan turned, roaring, his own savage, off-hand dagger drawn. The knives clashed in the darkness, striking hot, fiery sparks, for an instant lighting the gloom with their angry cry. Thrown off guard, Sirrus had time only to tear his dagger free before the moon-caught edge of Onan’s axe swung ruthlessly down towards the footpad’s defenceless vitals. Swiftly Sirrus leapt clear, wincing as the broad blade fanned his skin through the fresh slash in his black worsted shirt. Cursing but unhurt he landed on his toes and seeing the raging black mass bearing down upon him, he leapt once more and fled into the darkness. The hunter was now the hunted and the wolves’ skins now far less in question than his own.

“Well I see,” uttered Strepos the Ranger “I have a fine range of monsters against me!” He was outnumbered and for once the darkness was not to be his friend. Hiding offered no escape. Swiftly he sent two arrows whistling into the black mass of blood-bats marring the moon. The arrows’ slight silhouettes traveled on, striking nothing. Strepos held the oath on his lips as he saw that they were not without effect. Maybe it was the blood he had not found time to wipe from the arrowheads, but what ever it was, the bats appeared confused, dipping and spiraling erratically. He watched waiting for their bafflement to subside, but it endured. He seized his chance. In two bounds he was at the base off the grim gibbet. He leapt once more, seizing the scaffold with both hands, swinging himself up high to the top of the bar. There he stood defiant, black against the moon.
“If this be my last fight,” he swore drawing back on his string, “let it be a mighty one! My bow shall sing and my blade shall drink deep!”
Though he feared the boar may charge the gibbet itself and throw him from his perch and the black snake could slither its way to its top, the ground around him was bare and offered no shelter from the doom he would rain down upon any foe that dared to cross his deadly domain.
Ever watchful, arrow strung, Strepos waited as the moon, without pity, edged slowly across the star emblazoned sky.

Bash the Cleric placed his tin cup down next to him on the wall of Dewar’s Well and gave a refreshed gasp. The water was good, cool and sweet.
Before long he saw two shapes approaching from the south. The moon soon revealed them to be Kenny the Fighter and Secundus the Mage. It was clear that they had seen him too.
A single voice cut through the silence, “Well met!”
The other two heroes groaned, for surely such poor humour should not be endured, even in trying times.