White Dwarf #52 - The White Council and Radagast the Brown

After sorting through all my LotR miniatures during the last week, I decided today to pop into my local Games Workshop to pick up some new paints and so on. I picked up enough to get me started on my orcs - I chose these as my first army to paint as they can be used as allies for pretty much all Evil armies and can fight against all Good armies.

Whilst there, I noticed that the latest White Dwarf (Issue #52) was out. I picked this up and even got the manager to dig out a free copy of White Dwarf issue #47. I had heard that issue #47 had a small Bilbo vs. Smaug game that was played with cards. It got my interest piqued, so I grabbed a copy.

Once again, I will only detail The Hobbit articles that appear in the magazine and mention the overall theme for the rest of the contents.

The front cover presents a rather nice picture of the new Smaug miniature. It is a very nice sculpt but unfortunately it is well out of my price range and I doubt I could paint it well enough to do it any justice.

The bulk of the magazine is taken up with the new Warhammer 40,000 Cities of Death rules and some free cards but my main interest was just the four-page article entitled Hunt for the Arkenstone. It is a playing card-based game that allows two players to recreate Bilbo's hunt for the aforesaid jewel before he is caught by the dragon Smaug. 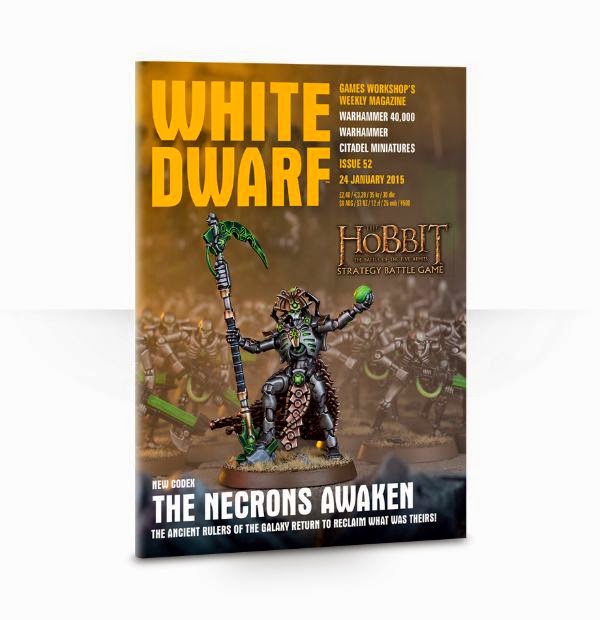 The main thrust of this issue is the reawakening of the Necrons for Warhammer 40,000.

What I was interested in though (and why I parted with my cash) was The Hobbit stuff. There is a fair amount on the latest figures releases in this issue...

This is only a small haul of The Hobbit goodness (8/32 pages, or 25% of the magazine content) but I feel that I have to occasionally purchase the magazines with content relevant to me to show Games Workshop that I still want magazine support for the hobby. If everyone else interested in the ruleset were to do the same, the spikes in sales of White Dwarf with The Hobbit content may show Games Workshop the game is popular and warrants a little more attention - one mag per month or two chock full of only The Hobbit stuff would be ideal.

With regards the new minis detailed in the magazine; I doubt I will buy them. They do look very nice but as they are cast in resin they are in a medium I am not too keen on. Sadly, most of The Hobbit releases are in Finecast, so I doubt I will buy any of them. However, the few plastic sets that are available (and hopefully others soon to be released) may allow me to collect some minis and play a few battles from that era as well as combine them with my LotR minis to make larger armies for certain regions for the later War of the Ring period. My existing LotR metal and plastic miniatures can proxy for those minis of beings that appear in both eras (i.e. 60 years apart).
Posted by Little Odo at 16:09