My Lord of the Rings Armies (The Boxes)

As I have a few weeks off work to get the building work done around the house, I thought I would attempt to sort out all of my Games Workshop Lord of the Rings miniatures to see what I have and hopefully catalogue them in readiness for a painting and gaming timetable. I will only be cataloguing the Lord of the Rings minitaures, as I will run a separate project for my (much fewer) The Hobbit minis.

Today I managed to find all of the boxes, blisters and individual minis that I have scattered around the house and pulled them together. I am sure I have missed a few, so when I get round to the painting etc. and I find any more, I will add them into the photos then. I collated them all into their relevant armies and then photographed them en masse whether still in their box, blister or in some state of completion.

My collection basically grew from the very popular Battle Games in Middle Earth magazine that was published by deAgostini way back when the films first came out. Each bi-weekly issue of the magazine contained a variety of articles that included painting and modelling guides, scenarios and some brief back-story. They also included a metal figure or sprue of plastics within the cellophane wrapper.  I collected the entire set and duplicated a few more as back-orders to create the basics of a few armies (mainly Gondor, Rohan and Orcs). I then went on to buy the occasional box set and blister directly from Games Workshop before they started to go OOP. I then picked up a few more via EBay to plug any gaps in the collection. The armies are far from complete, but I will need to sit down with each army in turn, work out what I need to complete it, purchase the missing miniatures either from GW or EBay, and then get round to painting and modelling them.

Anyway, enough with the chatter, here are the pictures I took today of the 9 armies I have begun to collect. You may notice that I have not collected one of the major races; the Elves. That is because Alex has a sizable Elf army (of all factions - High Elves, Lothlorien and Mirkwood), and he will continue to collect and paint those, so there is no point in me getting a duplicate of what he has on the go.

Dwarf Army
This army consists of 64 miniatures so far. There is a severe lack of plastic infantry, but that will be remedied soon by allocating a couple of  boxes of warriors from both the LotR and Hobbit ranges.

Easterling Army
This force consists of 101 figures, which also includes a small mercenary contingent made up from EBob's Mongol range. They make great Eastern-looking allies for Sauron's most devoted mannish followers.

The Free Peoples
This is not an army as such, but just a selection of the remnants of those that do not fit into any particular race/region. The 71 figures include my 2nd Age troops, a few Elves that Alex already has, a bunch of Hobbits, a few Istari and 'neutral' beings, as well as a small number of 'baddies' in the guise of Gollum and Shelob.

Gondor Army
The bulk of this force is made up from plastic men-at-arms and rangers. There are a few cavalry also but this is a very hero heavy force. That said, including some minor allied contingents, this force numbers 104 miniatures. 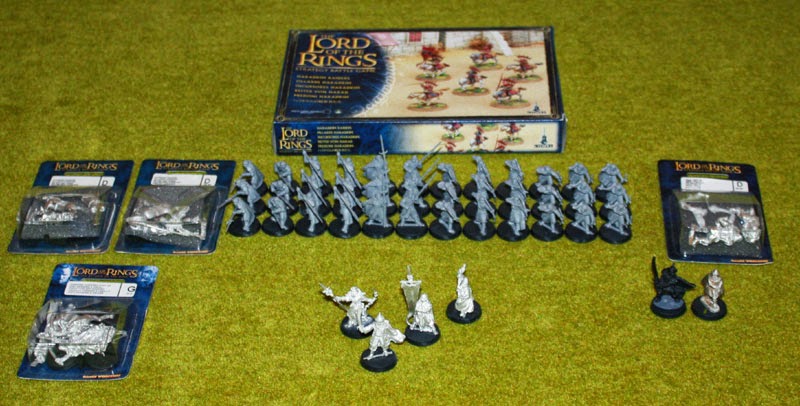 The Haradrim
Another of the mannish realms that fell under the sway of Sauron's dominion. This is a small force that will probably not grow much more. There are a couple of old Citadel and Foundry minis included as I felt they fitted with the theme of the army. I will use them as minor heroes or extra captains to add a bit of variety.

The Forces of Isengard
When Saruman was ordered to "Build me an army worthy of Mordor", this is what he came up with. This needs to be added to on the plastic warriors front, but there are a few siege items I would to add to this army too. 103 figures makes for a decent size so far.

Mordor Army
I am not sure if I will actually make a Mordor army. The bulk of these minitaures will feature as Isengard lackeys. I would like a few more Ringwraiths and so on as allies, but the rest I will paint on an Isengard theme.

The Mines of Moria
Not really on anybody's side, but always hateful of Dwarfs and sun-siders, this will make for a nice little diversionary force if I ever delve into the underworld. I have included Burhdur the troll as a leader for my three cave trolls to add a bit more oomph to this force.

The Rohirrim
This final force were my favourites in both the books and the films, so I had to collect a large army of them. So far, there are 117 figures, but this will expand quite a bit. The bulk of the plastic figures have been painted already, but as I am due to buy the same amount again, then this is probably a good thing.

So, there you have it, my Lord of the Rings collection in almost its entirety. My next task is to begin opening the boxes and blisters and then cutting them from their sprues in order to begin gluing them up. I will then work out what else I need to buy to complete each army by using the warband rules in the SBG rulebook. Each hero and captain will lead a warband, so I guess there are many more plastic purchases in the offing. There are also several metal miniatures I still need to complete what I need. I will be making one small house-rule with regards the forces: Murin and Drar - I am going to allow them collectively to lead a warband, so in their case there will be 14 in their warband rather than the usual 13 (including leader).
Posted by Little Odo at 16:57