The kids were badgering me to explain what I used to get up to on a Wednesday evening, so I went out and bought the Dungeons & Dragons Starter Set over the weekend. I have to take my hat off to Amazon on this one: I ordered it on Sunday night with the Super Saver free postage offer and it arrived Monday morning! Quicker than Royal Mail 1st Class. 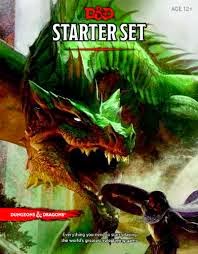 Anyway, onto what you get in the box... 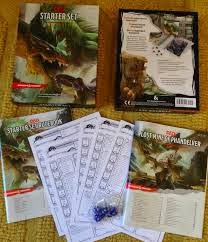 The first thing that fell out as I opened the box was a set of blue polyhedral dice: the usual d4, d6, d8, d10, d12 and d20. I would have liked a d100 too but there you go. We have four complete sets of dice at home that are easy to find (I don't know what happened to all my old gaming dice - they have become lost somewhere whilst we are moving stuff around for some building work that is currently going on in the house), so I can get a game going with the kids in the next week or two.

The next thing I noticed was a glossy blank character sheet (no doubt meant for photocopying) and five pre-genereated characters - just add preferred name.

Next up was the Starter Set Rulebook - a 32 page rulebook that has all the info to get you started whether as a Player or DM. This contains details of character stats, combat, adventuring and spellcasting. I am presuming that this only contains a very small fraction of the spells and equipment that will be available in the full version, but it is certainly enough to be getting on with. I have only had a skim read through this book but all seems standard fare; the usual character classes/races look like they will be available in the full version of the rules, but I have heard rumours that some of the latter stock races (Tieflings? - not sure what they are, but wanting to find out) will be too. The standard game world also seems to be Forgotten Realms, not that that means anything to me as I always play in my own campaign settings and adapt modules etc. to fit. There are a few new rules that I would like to try out - Advantage/disadvantage instead of trying to find all those plusses and minuses when calculating To Hit etc., Feats and Skills have been simplified, but not too much, and combat seems to be quite streamlined now.

The final gaming item is a 64 page adventure booklet. I have only glanced through the pages (looked at the nice artwork but not really read any of it), but it seems quite a substantial and comprehensive manual. I will be trying to run this with the family in the next week or two - just as soon as the house is back in order after the building work.

Then there is one last item - a cardboard tray. I am unsure what its purpose is within the box - maybe it is to be used as some sort of divider within the box itself, or maybe there is more to come that will fit into the starter box and thus require something to hold it? I will use it to hold the character sheets and dice separate from the rulebooks. I am sure many pieces of note paper will be required for running the adventure and perhaps it can hold all of those between sessions?

Getting onto the whys and wherefores of the Starter Set, I bought it on a whim due to questions asked by the kids and because it was not too expensive (£16.99 including free postage). It will also give me an insight into the new version to see if I want to pick up the three core books in the future (most likely that will be a Yes). I am hoping there will be some kind of conversion kit to allow migration of old characters from any version to this version. I would like to get the kids playing something and maybe involve my wife too, so we can have a monthly (or weekly?) gaming session with snacks and fizzy drinks around the dining table for a couple of hours of interacting together. It has got to be better than just vegetating in front of the TV.

In summary, as this is just a starter set there is a heck of a lot of stuff missing, but it does work (from a cursory glance through) for beginners to D&D I think - everything you need is there in the box to play a game except maybe some figures and a battle mat (but Wizards stress that this game should be tried as an imagination based game too). I think that for your money it is a little light on physical content; i.e. two booklets, 6 (character) sheets of paper and 6 dice is not really that much for the money, but if I compare it to other rulesets (e.g. Saga) I have bought recently it is on a par. The quality is very high and the production values second to none, so knowing what D&D is like in play, I think that you do in fact get quite a bit. I would give the Starter Box a good 7 out of 10 for effort and presentation, and the hours of fun it should produce.
Posted by Little Odo at 12:20