Here's the next couple of space marines from Alex. First up is Lord Kaldor Draigo. Alex picked this up second hand off a stall at a gaming convention recently at a good price; ready made and undercoated. He has done three-stage shading on this one but I think the shading is too subtle to show up in the photographs - I especially like the way he has painted the face. I think he has painted him as a Space Wolf, thus the bare metal Terminator armour. I am sure when Alex reads this he will sceam at me for being an idiot and let me know what chapter he is actually from, so I will update the post if I have got it wrong.

UPDATE - Yep I got it wrong. He is a Grey Knight! 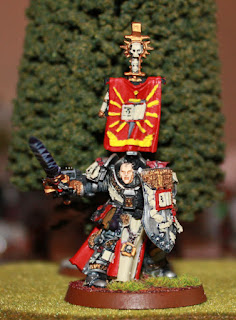 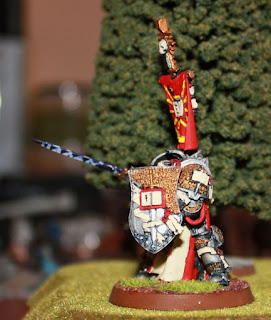 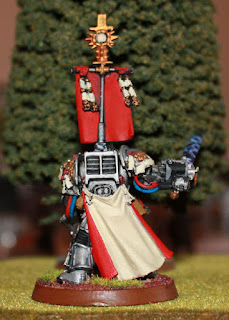 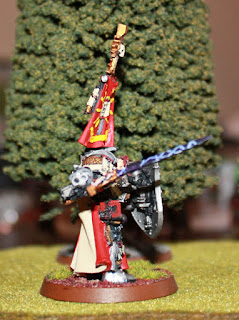 This next mini is the limited edition one you get from the Assault on Black Reach box set. Again, he got it second hand from a show we attended a little while back. He has painted this one with the block paint and wash method to fit in with the rest of his standard Space Marines. I think his brush work is getting neater and he is making fewer mistakes now; he just needs to start pushing his limits with the 3 stage painting to perhaps a more blended style approach. It will come with time though. It took me thirty odd years to get to where I am (which is not so good) but I didn't push myself, so never really improved after the first year. I wish I had done so as I am now happy with mediocre paint jobs when maybe I could be producing stuff a tad better. I am great at giving the advice but not so good at following it! 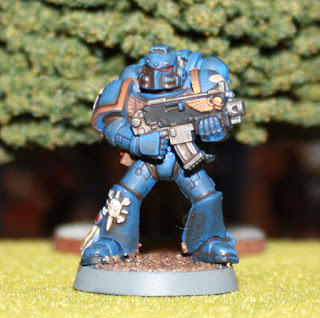 Next up should be some more of Alex's figures and then maybe a few of mine.
Posted by Little Odo at 23:07