Today, I managed to complete a couple more stands for Hordes of the Things. These Amazons are some early Citadel minis. I also have a mounted version and some priestess types to be completed. However, this stand will become part of the barbarian army I am putting together. I think I have enough for a 24AP army if I include all of those Prince August minis, these below, the rest of the Amazons, the giant stand and a few stands of cavalry that I still have yet to paint. I think I will just need to get some sort of hero/general stand to complete the army. 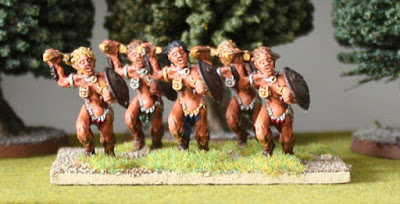 Here are the heavies for the orc/goblin army. A couple of early Ral partha Trolls. I have based them up as a behemoth stand. A worthy adversary for the barbarians' giants stand. 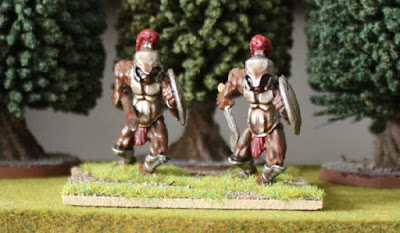 Here are both stands in action against each other.

I have still got a bunch of wizards that should be completed by next week. These will be for RPG gaming. The final Prince August stand of barbarians should also be finished fairly soon too.
It looks like I will probably get the barbarian army finished before either the orc/goblin or dwarf armies. So, when I order up some extra dwarfs and goblins, then I should be almost there with both of those armies too. I can't wait to get a game played with them and the write up onto this blog.
I haven't kept a quota of minis bought so far this year. Last year I bought quite a few GW LotR minis, along with many Warlord Romans and Celts. I also picked up some Crusader, Gripping Beast and Perry Normans. This year I have kept my buying to a minimum so far...
Box set of Knights of Dol Amroth
Duinhir
Blackroot Vale archers Command
and that's it!
Next month when I get paid, though, I will be picking up the rest of the dwarfs and orcs/goblins to complete my armies - most probably from Vendel. I also need some Ranger types for RPG - Vendel do some good ones of these too. My final character class that is ill-represented is clerics. Does anyone out there have any suggestions for a decent range of 25mm adventurers that I could use? Reaper Minis are great but a tad too large to fit in with the rest of my collection.
Posted by Little Odo at 13:59