I have finally finished the 2000AD stuff on my work bench. It took a while but I think they have been worth the wait. You have already seen the Judges and Lawmasters but when collecting the minis together I wanted to add a vehicle for support purposes. Most of my childhood toys have bitten the dust but I did manage to find a few Matchbox die-cast sci-fi vehicles from their Adventure 2000 range hidden away in a box in the loft. I have the Land Raider (as per the vehicle from Judge Dredd's Cursed Earth adventure) and a couple of others, including the one below. This is designated as the Crusader K2003. 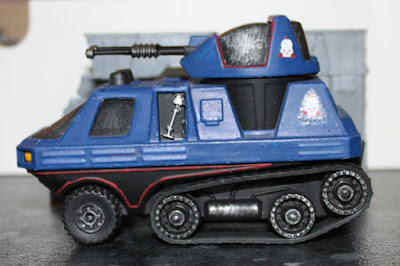 It was originally painted in a sickly lime green, so I decided to paint it in a blue to match in with the Judges' uniforms. I also painted over the windows to make it appear as if it had blast shields down. 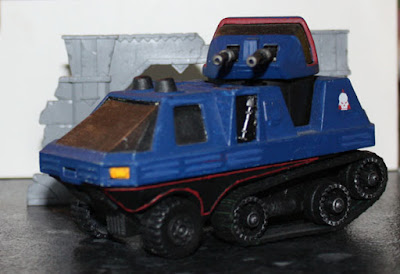 Here's the entire Sector House so far. I will try to add to it over time with some more Citadel Judges from EBay and maybe some Foundry ones. As mentioned previously I also have about 9 or 10 very early Space Marines who I will be painting up as 'heavies'. I also have that collection of Heresy enforcers to man the desks and a couple more of those Matchbox vehicles (the Land Raider and some kind of missile launcher).

Next up should be more Prince August Barbarians for Hordes of the Things. I have tons of other stuff on the workbench at the moment, so after the barbarians there could be almost anything appearing on the blog.
Tavern Knights of Legend is due to end soon, and I have been tasked with running the next play be email game. It will be a strategy game based in an imaginary country where the players take on the parts of warlords with their minds set on conquest to become overlord of the land. More details on this in a later post.
Posted by Little Odo at 17:26