I am off work this week as it is half-term at school. In between feeding the kids (a full time job in itself) and running them to the park etc. I have been catching up with my comics and trades reading, DVD watching, and figures sorting and painting. Today, I pulled together several boxes of figures I have around the house in order to bring some semblance of order to my collection.

Whilst working my way through my 15mm stuff I found I actually have enough for four armies for HotT for my Doggerland campaign. I was going to paint these all up and then run some tabletop battles but just never got around to it. That said, I did come across a few bases of Two Dragons' Anglo-Saxons that I had made up for some game I obviously never got around to playing. I have decided to put these up on the blog so they can be compared to some bases I started painting today.

First up is the General's base - the flesh colour looks very washed out compared to the Dwarf Flesh I currently use for most of my figures these days. 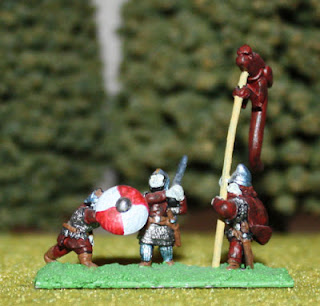 Here are three bases of Spears - I'd gone for a red theme for some reason.

Finally, here is a picture of all the miniatures I have so far painted. A small army (12 APs: General, 2 Blades and 3 Spears) ready to take on either Viking or Norman invaders.

The basing was just some green paint and sand mixture, but it obviously served its purpose back when I painted them. I am not sure if I will get around to adding to these but I am definitely going to work towards a different paint job for a 24APs HotT army of Doggerland for some future tabletop gaming. I will need to work out the amount of Blades, Spears etc. but I will theme each army differently just to see how they get on against each other.

Hopefully I should be able to get a bit more painting done through the rest of the week, and I will update the blog as and when i get something else completed.