I took a trip down to my local GW today to take a look at the new "The Hobbit" stuff on offer. Unfortunately the stores do not get anything in until actual release date, but I managed to have a good chat with the manager of the shop and one of the staff before purchasing the latest White Dwarf for perusal at home - something I have not done since February 2011. 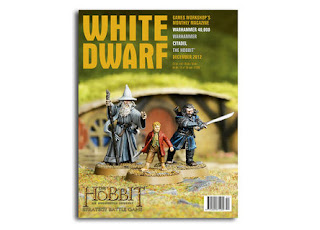 We can expect the game to be an update of the Strategy Battle Game we have all come to love said the GW bods. It looks like the new rulebook is indeed the next step in the evolution of the game, and I found out that the new hardback should contain the latest ruleset (but previous supplements are compatible) for both LotR and TH (The Hobbit). It includes a beastiary and rules for all of the existing range of LotR miniatures as well as the new stuff coming out. The softback that comes with the box set "Escape from Goblin Town" will contain a cut-down set of rules that only caters for The Hobbit.

Delving into White Dwarf, we have no less than 62 pages of The Hobbit goodness out of a total of 144 actual pages - not a bad return in comparison to previous months' magazines (the reason I stopped buying White Dwarf was because of its very limited cover of LotR:SBG). Inside the magazine we find the following articles...
There are also a few articles on Warhammer (a featured Ogre army and painting guide) and Warhammer 40K (a delve into the realms of Forgeworld and attack craft/vehicles). These game systems are not really my thing, but the articles look potentially good for WH and WH40K players.

I have to admit I am becoming quite excited by these new releases for SBG, and the photos of the minis look good so far. To summarise a few things for you ...
Overall, both the releases for The Hobbit and the new White Dwarf have been great to see this month, and they have definitely renewed my interest in the Strategy Battle Game.