The Hobbit: Escape from Goblin Town - What's in the box

I succumbed. I popped down to Blue Water shopping centre to do the Christmas shopping this weekend just gone to get the family their presents, but I was also looking for something to buy myself to celebrate the festive period. Anyway, at the end of the day, I wound up inside Games Workshop whilst Mrs Odo popped into some cosmetic shop or other. I was only going in for a look and came out with the new box set. 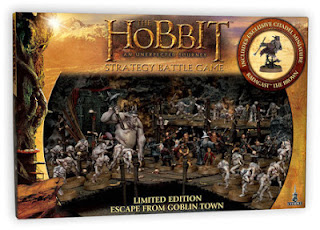 I had a good look at the contents when I got home, and started on reading the new rules. There are a few differences/additions compared to the LotR Strategy Battle Game, but essentially it is the same game and one that your old LotR minis can still be used for.

Anyway, this is what you get in the box...

2 Large sprues of Goblin Town scenery (walkways and ramparts)
1 Large sprue of the Goblin King, his throne, a captain and the sling type contraption complete with an extra tichy captain, scribe in the sling
2 identical sprues of goblins, each containing 18 goblins to give a total of 36 goblins (+4 from above to give a grand total of 40 goblins in the box set)
1 sprue of the 13 Dwarfs, Bilbo and Gandalf
1 small sprue with the limited edition Radagast the Brown

A set of instrucrtions to build the minatures
A set of instructions to build the Radagast miniature
A stat sheet and scenarion for using Radagast the Brown
"Your Journey Begins Here" booklet - contains details of scenarios to help you get into the game, as well as stats for all miniatures in the box set
A quick play "Play Sheet"
An A5 sized rules booklet for the Strategy Battle Game

Well, I have got to say I am very impressed with the detail and quality of the miniatures. The goblins are not my favourites style-wise (not that I dislike them - they may just take a little getting used to) but are none-the-less sculpted very well, with lots of details. The dwarf company have to be some of the best plastic miniatures I have seen for a long time - full of exquisite detail. I have to admit that when I first saw the painted miniatures in my local GW I thought they were Finecast, such was the quality of the sculpts. Alex has now got his eyes on a sprue of them if/when they are released separately. The only gripe I have with them is that they are of varying heights. Nothing wrong with that in itself as everyone is a different size, even in fantasy realms, but a few are not really dwarf sized - they are quite tall to say the least. Then again, that may just emulate the size of the characters in the film.

Overall, if you are a fan of the books, films or SBG then I would recommend the box set. Yes, it is a little pricey, but you do get quite a lot for your money - a full game with plenty of scenarios in the box. And to buy the parts separately it would be a heck of a lot more.

I also took a look at the new Hunter Orcs and Hunter Orcs on Fell Wargs whilst I was in GW. Again I really like these and will definitely be getting some (lots) of these. I am not too keen on the trolls (Bill, Bert and Tom) though, and as they come in a bit too much for my wallet figures/pound, I doubt I will buy them. The Finecast White Council are very nice figures too, but again are too expensive figures/ pound, so I doubt I'll get these either. Now, if they were released in metal and were a lot cheaper I would definitely get them.

I also got a sneak peak of the elf cavalry that are due out in the next few months - again they are very nice.

It seems that GW have really pulled out all the stops with this new range and I really hope they keep up the quality for the entire range. The price has risen slightly, but I have read that this is because the franchise has cost them a lot more this time round. Not sure what I think of this yet, but I still think the non-"big monster" plastic miniatures remain just inside my range of value for money.