I have at long last begun to get back into painting after a long hiatus. The time spent not painting has been very productive gaming wise, as I have been involved in two rather excellent fantasy RPG games (AD&D and Pathfinder) and some long-term discussions about re-developing some old sci-fi stuff with one of my oldest gaming friends, Arlo.

My eyesight has not improved (will be going for a check-up in the next couple of weeks to change my prescription) with the time away from the close scrutiny, and it shows in some of the pictures below with the parts I have missed or gone over accidentally and not noticed even when checking for such errors - ho hum, the camera doesn't seem to lie in these cases.

Anyway, I have also managed to put a lot of pigment onto a rather large bunch of Norman milites, but it will be a short while before they are anywhere near completed. I have also undercoated a handful of clerics for AD&D to go with all of my fighters, thieves, barbarians and magic users that were completed a year or two back., and some old Denizen miniatures for the Hitchikers Guide to the Galaxy.

Getting back to the sci-fi theme, here are the final painted versions of the first released Citadel Space Marines. I have already painted up a couple as Judge Dredd style heavy troopers, but these ones are painted as Dark Angels (my preferred WH40K troop type). I really like the womble-head style of the helmets, and think that Citadel/GW should have stayed with that style imho.

This figure, although bought as part of the same set, doesn't really fit in with the unit, what with the skull motif on his shoulder pads. I painted him differently, as if he was a baddie. I have also found another bunch of sci-fi style baddies that I bought around the same time that I will add to a menagerie of scoundrels - maybe the crew of a space pirate ship? Hopefully I'll get those painted before Christmas. 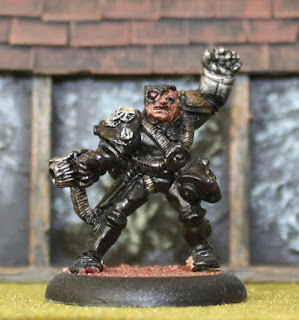 This one, with an old style chainsword I have designated the commander of my little squad. 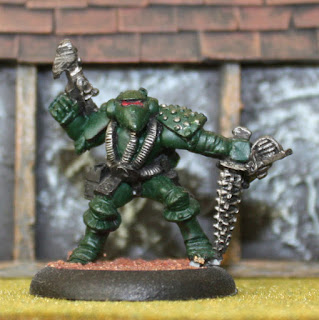 And, here are the rest of the squad - all with the same weapons except for the last chap. Not sure why he was sculpted with a different weapon, but it does add to their individuality I guess. 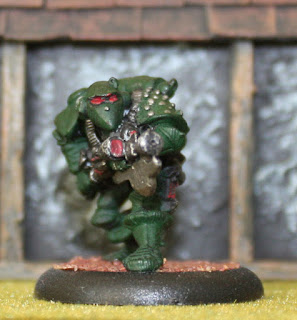 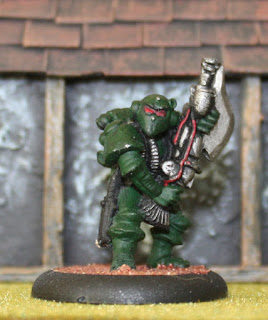 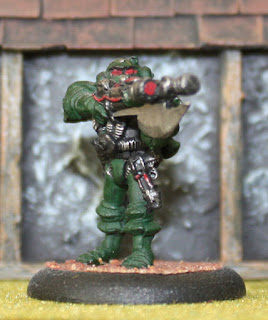 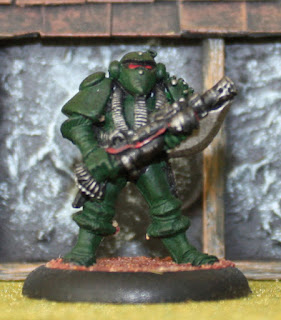 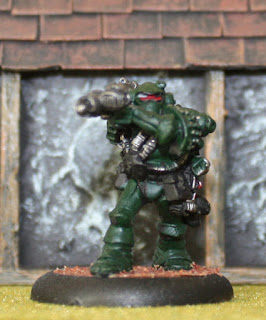 Finally, here is a group shot of the whole squad. Those space pirates had better beware!

Alex has also been picking up the brushes again and managed to get a few more finished - I will post them up later when the basing is completed.