Whilst the rest of the party are sleeping, Korum Proudfoot gets bored on watch. He has struck up a good friendship and level of trust with all of his new companions, but he is forever curious. Since arriving on the new plane looking for unicorns, he has found Rioja Hyrule's diary and scroll collection. He has decided to copy them down for 'safe keeping'. Keep it quiet, no-one knows of these night time purloinings... 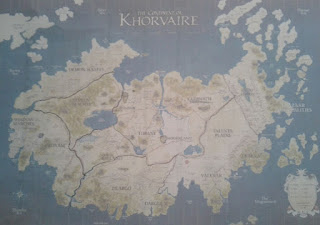 written by Russell, who plays the magic user in our game - I don't wish to have it thought I'd steal his IP - unlike Korum! :-)
From the diary of Rioja Hyrule (the day we found the hidden study):

Today we got our first real clues about unicorns, after spending days adrift in this strangely dark wilderness. After the terrors of the night in the barn, we discovered in another of the buildings a hidden study, filled with tomes of unicorn research, along with research notes of the inhabitant, of whom there was no sight.


In the main house we'd found books of fairy tales which included references to unicorns, but in the hidden study there was more scholarly work. Some were detailed collections of the mythology of unicorns, and other legendary creatures. Some speculated on the other planes of existence these creatures inhabited. Others chronicled those who'd claimed to have been to these planes.


Unfortunately the best of these claims was by one "Ilfrid the Unsane". He claimed that in certain areas of land one could dig down, along, then up again, and enter one of these plains. He even claimed to have been there and back, returning with a unicorn horn as proof!


The notes taken by the house's researcher took these claims far more seriously than any of our party did. He was studying many of these "planeswalking" rumours in the books, but had highlighted this Ilfrid's instructions and clearly believed them. He was even planning how to protect himself once he got through to the other side, deciding to take weapons rather than trust in hired help.


I'm unsure who is more 'unsane' - Mr Unsane, or the unsane researcher that wanted to follow him!
...

From the diary of Rioja Hyrule (the day we found the tunnel):

Yesterday's mockery of Ilfrid's story has proven unwise. A hidden passageway discovered in the hidden study led us down, then along, then up... teleporting us into what is clearly a different plane. No unicorns here, instead the dead body of the researcher, slashed repeatedly, greeted us.


We found more of his research notes upon his person, initially commenting on the very bright moon, but quickly turning into the scribbles of a man afraid of the forest that surrounded him. He reported seeing many man-sized creates in the forest. We assume it was these breasts that killed him.

Given this turn of events, I decided to take the rumours in the books I've brought more seriously. Before bed all I learn is that unicorns are said to live deep within forests, but are only ever seen on the outskirts or plains near forests. I would dearly love to read more, but I must study the new scroll I have obtained to fully understand it magical powers.
Posted by Little Odo at 10:56