I don't usually pick up that many magazines, but this month wound up being a bit different to normal. I bought four of the usual suspects. I am aware there are others out there, but as I generally only pick them up in WH Smith or direct from GW then these are the only ones available to me. As seen in a previous post, I picked up White Dwarf, but I also decided to take a look at three of the other big names...

This is my favourite of the main magazines, mainly because it caters more to my tastes than the others (namely: fantasy/sci-fi, ancients and early medieval). The others are as good if not better quality wise but it is purely the sci-fant content that nudges this one ahead. Good news is that they will be releasing a sci-fant only magazine called Darker Horizons (following on from Gary Mitchell's monthly column in the magazine). I bought the one they released last year and thoroughly enjoyed it. 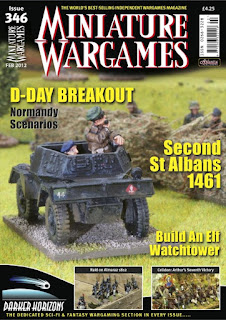 Carrying on from the White Dwarf format of write-up below, this month's issue tickles my taste buds with:
pp12-15 - The Battle of Celidon (Arthur's 7th battle)
pp16-19 - 2nd Battle of St Albans (War of the Roses)
pp50-54 - Darker Horizons (Sci-fant stuff)
pp56-59 - Building an Elf Watchtower

This magazine has a more practical format than the other two (the magazines can be stacked more easily either flat or vertically due to the binding). However, they refuse to cover sci-fant which marks them down a little for me. That said, their production values are great and I prefer the 'feel' of this magazine to the rest, although their being tied to a particular game system (Flames of War) means that, for me, there are too many articles based on that system which makes me hark back to when White Dwarf was on its way to becoming the house magazine we all love today. 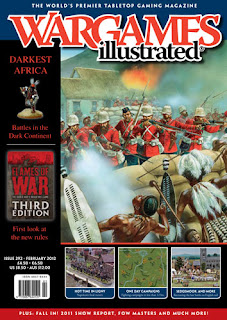 These are the articles that caught my eye this month...
pp102-103 - The Saxon Shore (campaign based wargames for the day)
The Zulu theme this month was very interesting and could easily be used for my favoured periods. Lots of conversion potential here.

This has recently been relaunched and production values have risen considerably. It has a nice glossy feel, even though it is printed in a matt style. They usually have plenty of different articles each month, so there is always something for everyone, but recently they have been themeing (sp?) the issues which has cut down a little on the variety.

This month's issue had articles on:
pp62-65 - Chase some Booty (Saxon vs Viking scenario)
pp66-69 - Sine Missio - WAB house rules for Gladiators
pp74-75 - Up Front (column on the way in which trade show games are changing)
This was another Zulu themed magazine, so it was a bit overkill having two magazines which followed the same theme. This would make me more than happy if all the magazines catered purely to my tastes: three magazines solely written for sci-fant, Dark Ages, Medieval etc would be a dream. However, a sneak peek in WH Smiths has generally driven my purchasing (this month excluded), so I only pick them up if they have approximately 1/3 of their content devoted to my periods.

All three magazines also run their own take on product reviews, which I find are very useful. They also have their own columns, some good and some not so, but my favourites change each month as they are eclectic in nature and this appeals to me.

This entry has really been more to take into account my own thoughts on these three (four if you include White Dwarf) magazines and give an insight into what and why I buy these products. I guess I buy them all on average two or three times a year, but nearly always get one magazine a month, just to keep up to date if nothing else. I also pick up a few of the free online pdf style magazines that are doing the rounds, for example The Ancible and Mongoose's magazines. These are mainly just for ideas as I don't play any of Mongoose's systems, but they keep the grey matter ticking over.

What do I miss from the olden days when I first started buying magazines of this nature? My all time favourite magazine has to be early days White Dwarf before it became a house magazine for Games Workshop products. There were the usual reviews and what not, but where modern magazines seem to run battle reports (which in my mind is cheap magazine content) the older sci-fant magazines would give loads of scenario ideas, modules etc aimed at loads of different gaming systems. These were looked forward to each month and many of the adventures and games published were played or adapted in one form or another. Another magazine I enjoyed was Imagine; the in-house TSR magazine for UK D&D players. Again, the same format as White Dwarf but limited to TSR games.

It would be nice to see Atlantic Publishing's Darker Horizons take on some of the format of the old White Dwarf, but I am just glad sci-fant is gaining in popularity with the mailstream again.
Posted by Little Odo at 16:56