I managed to finish these chaps off over the weekend and this evening... 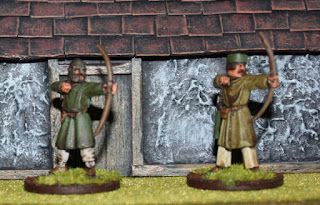 They are the last of the Gripping Beast Arthurian archers I picked up at Salute last year. My post-Roman force is now quite respectable but just needs a few more adding to it to round it off.

I have a pile of heavy armoured chaps to paint and will most likely grab a few extras like a personality leader or two, a sorceror an dmaybe some slingers if GB do them (I will need to check their catalogue).

These Romano-Brit figures have actually seen the most action out of all the ones I have painted up since starting this blog. They have been played in two Brytenwalda face offs with Alex, and four SoBH match ups against Dunc. I sure hope they will see the light of day more often this year, along with more of my armies.

Next up should be a few barbarian archers for my HotT Barbarian army. I also have those Chronicle Hobgoblins to undercoat (bases have been stuck on) and a big stack of Norman cavalry. Hmm, maybe a match up between the hobgoblins and Dunc's Anglo-Saxons might go down well.
Posted by Little Odo at 23:07