Alex and I decided to try out our first Brytenwalda game this evening. It was only to be a run through to familiarise ourselves with the rules a little.﻿ We pulled together the minis needed for the 600 Solidus armies and rolled for Defender and Attacker. We agreed on a 25% Solidus loss level to mark the end of the game.
Alex rolled higher and decided he wanted to be the Attacker. I set up a small 2' by 2' board with each player having a hill to their left flank and a small wood to their right. As Alex was Attacker he could swap two items of scenery and he decided he wanted the hills on his side and the woods on mine.
Here's Alex's army set up from my point of view.

Here's my army set up from Alex's point of view.

As Defender I set up first, with my cavalry on the right flank and the infantry holding the centre. Alex set up exactly the same way. We set up within 10 centimetres of our respective board edges. 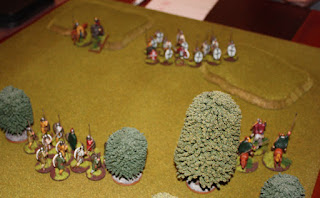 I won Initiative again, but failed my order roll. Luckily my infantry unit had a hero with them so could re-roll and luckily they passed second time round. So, both units moved forward a little more. Alex did the same. It looked like it would become two infantry versus cavalry battles in this skirmish. 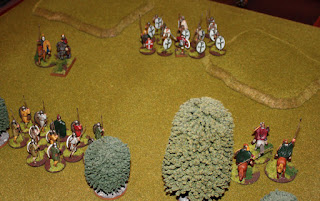 Alex won initiative. With a roar his pendragon and marca hurtled into my infantry. Combat resolution was swift and bloody. I lost 5 aulue and Alex lost his marca. I lost the battle, so my unit was pushed back 1 inch. Both sides passed their Morale checks. 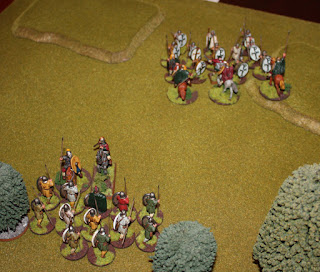 My part of the turn saw my cavalry return the compliment. Alex lost 3 aulue but I didn't lose any troops in the melee. As Alex lost the combat, his unit retreated 1 inch. Both sides passed their Morale checks. 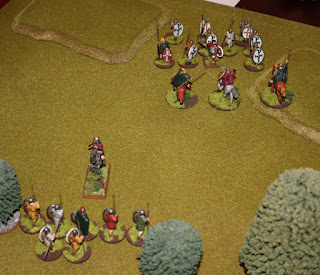 We totted up the losses and found we had both lost more than 25% of our forces, so each side retreated (plus it was past Alex's bed time, so this worked out fortuitously). I lost 170 solidus and Alex lost 164, so we decided it was as near as dammit a draw, even though Alex edged it points wise.

The board we used was rather small, but this was a run through battle to just see how things played. Next time we'll have to at least double the size of the board to allow for 28mm scale movement as opposed to using the 15mm scale measurements.

Neither of us used the missile weapons of our marca - they had throwing spears.

I think we totted up the Combat rolls incorrectly, so 1 cavalryman would have had the same effect as 11 as against the 12 man infantry units in our game. Results would have been quite different otherwise.

It seems the whole unit is affected by combat as opposed to just those in base-to-base combat. We may look at changing this methodology for combat resolution in future games. That said, if we had smaller units then the effects would have made more sense.

This was a very quick game that took longer to read the relevant rules and set up than to run. That said, it was quite good fun despite our mistakes. Next time we will make a few amendments to our interpretation of the rules and maybe I will pit my daughters against Alex for a bit of sibling rivalry, as the two girls were asking why they couldn't play.
Posted by Little Odo at 23:55