Finally got these Brytenwalda aulue finished. They are the twelve that Alex will be using in his games against me. They are the so-called green warband, but there were only enough transfers to do eight of them in green, so the rest had to have red. Hopefully we can get a game going in the next couple of weeks. All figures are Gripping Beast and the shield transfers are from LBMS.﻿ Here's the first picture, showing the swordsman and banner bearer (without banner at the moment) front-centre. 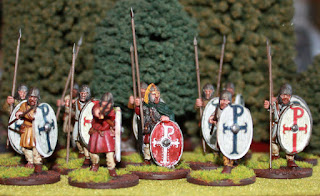 Next up is a more bird's eye view, showing off most of the shields. 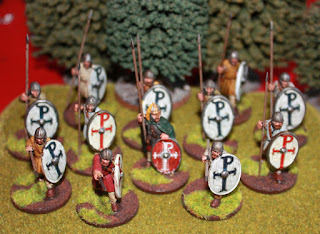 Finally, here's a shot from where the banner bearer is looking. 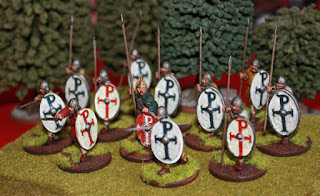 I also put a bit more paint on a few more Broo and several of them are now ready for basing and/or varnishing. I managed to base up a few this afternoon but they won't be ready for finishing until next weekend or one evening during the week if the weather (and light) holds up.
Posted by Little Odo at 19:13