I have been working on these figures for a short while now, but finished them up this afternoon. They are all very old Dixon miniatures which I don't think they make any more.
I think they were actually designated as fighters but as they are true 25mm, they come up very small against many of my other minis.﻿ Due to their lack of armour and light weapons I have decided they'd be better off as rogues/thieves. Finishing these ties in well with me re-puchasing the AD&D 1st Edition Player's Handbook and Monster Manual last weekend from EBay. I want to start up playing D&D again, and this is the version I really went to town on back in the late 70s/early 80s. Over the life of this blog I have painted up a good dozen of each character class with the exception of clerics - anyone out there have any ideas where I can get some Old Skool style clerics?
Anyway, back to the minis. First up is a female rogue with sword. She is absolutely tiny - just right for squeezing through those narrow gaps to evade the city watch. 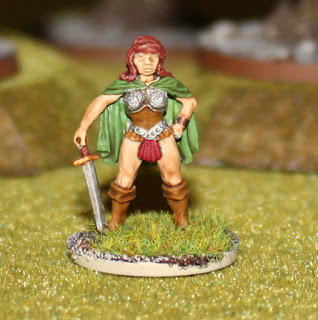 Here is another female thief. She looks a bit richer than the one above - either she is more successful or likes the conspicuous display of wealth in favour of the more down-to-earth look. 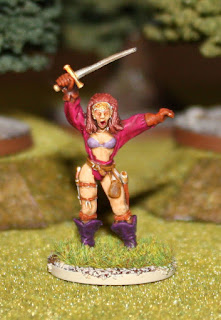 Finally, here is a male rogue. He seems quite eastern looking to me, the sort of person you would find in Zamora kicking around in the sort of dens Conan would visit. 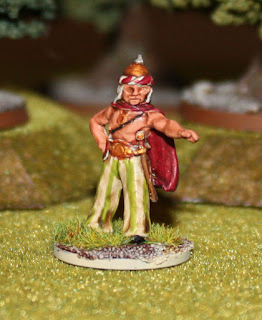 Tomorrow should see the finishing up of the first Brytenwalda army. I will then have to sort out what I will be aiming to complete this month. Most likely another Brytenwalda army for Alex as he already has the leaders almost completed, and just needs a unit of troops.
Posted by Little Odo at 18:40