This year I have decided to try to do things a little differently. I will decide on a theme each month and try to paint a unit or army or a few stands towards it. I am hoping this will allow me to complete armies more quickly and thus be able to use them to play games. I will try to post work in progress shots of all of the figures projects I work on each month. If I happen to paint anything else in the meantime, then they will wind up on the blog too as extra entries.

This month I have decided to put together a 600 solidus Romano-British Brytenwalda army. Here are a couple of shots of them in their undercoated state. Hopefully each week I will be able to add a picture or two to show my progress. All my potential Brytenwalda minis are from the Gripping Beast Romano British /Arthurian-type range. All I can remember buying is a pack each of armoured and unarmoured spears and a handful of cavalry. I will add to the collection with a wizard and some archers eventually to round out the army in later months. 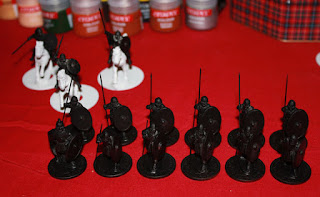 This 600 Solidus Romano-British army is made up of the following ...

This is a starter army which will hopefully have another similar one painted next month. I am going to name them the Reds and the Greens initially due to the colour schemes I am going to use to paint their cloaks and shields. The army this month will be the Reds.

Alex has bought into this too and he is putting together his own unit. We both bought some Gripping Beast packs of minis when we went to Salute back in 2007! Mine are to be based on washers and 2p pieces but Alex has decided to go down the Warhammer base route (20mm squares). Luckily the rules are OK with basing differentials, as long as warriors are based individually.

Hopefully I'll have an update or two for this weekend's work. Alex will certainly have something to show as he is busy painting up a couple of troops as I am typing this!
Posted by Little Odo at 21:09