A bit of a change this time round. I haven't quite completed the Brytenwalda minis yet - just need their shields completing and then a touch of matt varnish to finish them off. In the meantime, my gaming buddy Colin dropped me a line with a few things he has finished off over the last few weeks or so. Thanks to him for letting me show his handiwork, i.e. the miniatures we game with when we do get together. These are a bunch of his 15mm goblin horde members. 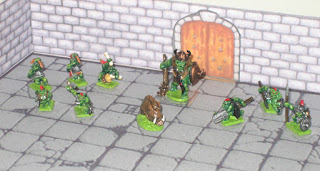 This is the general gist of the email he sent me with the attachment...

"They are painted in gloss so they don't come out too well as they shine a bit in the flash, making it look like there's undercoat showing through in a sloppy way. They are mostly "Tin Soldier".

The Goblin at the front left with the tusks is actually an Irregulars Miniatures's 6mm Troll that was sent as a free sample.

The big chap, a troll or bugbear or ogre (as required) has been adapted slightly with the addition of black horns on his helmet where there were a couple of stubs and with angry eyebrows, as he looked a bit too gormless to look mean - all Milliput.

The wild boar is home made, carved out of almost hard Milliput. The base is another piece of Milliput, this time formed into shape whilst moist. The tusks were added later ... If the urge takes me, I'll try to make a mate for him, with a longer snout amongst other lessons learned.

The dungeon floor was a free download I darkened and reduced for 15mm and the walls and door are home drawn, scanned and printed of on 350gsm paper."

Colin usually runs our fantasy pen 'n' paper RPG, Dark Realm. These are rules that he has developed over the decades with the occasional bit of help from some of us other players. The game runs very well, and combat is brutish and bloody - very realistic. Hopefully one day this year we will get to meet up and have a game or two so I can see the beasties above in the flesh. I have seen his first few goblins and fought them as adversaries to one of my PCs, who was ensorcelled by the local witch who had a few as her minions. maybe he will one day be rescued?
Posted by Little Odo at 20:04