We're off to see the Wizard...

I feel as though it has been a while since adding some more minis to the blog. I've been a bit busy with lots of other things that have taken over from gaming these past few weeks. There was the geophysical survey at Shooter's Hill for Digging Dad's Army that took up a fair bit of time, the usual work commitments and a serious illness in the family (luckily all is well there now though).

Anyway, back to the minis - Here are the first of my wizard minis. These have been painted to represent wizards of the element Earth. They are both from Ral Partha's ranges from the late 1970s. The one on the left reminds me of Tim the Enchanter from Monty Python and the Holy Grail, but I decided not to paint him in black to enforce that image. 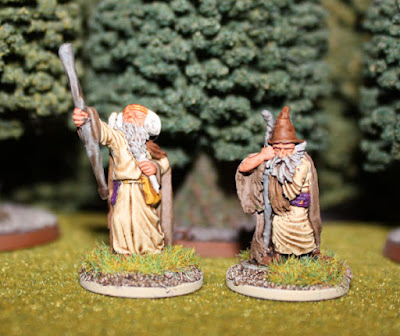 A bit out of focus this one, but another couple of Ral Partha figures to represent wizards of the element of Air. 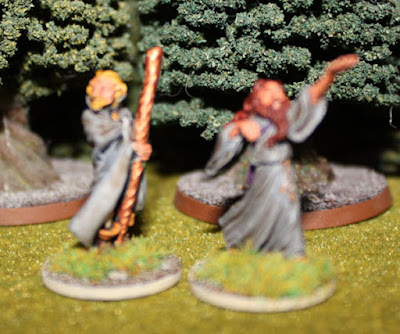 Moving onto the element of Fire, here are a couple more mages. The one on the left is an old Citadel female magic user and the one on the right I think is a Greenwood and Ball (?). The right hand figure had very little detail on it, but the folds of the cloak rescued it somewhat. I have decided to go with a snake motif for Fire - don't know why but it seemed right. 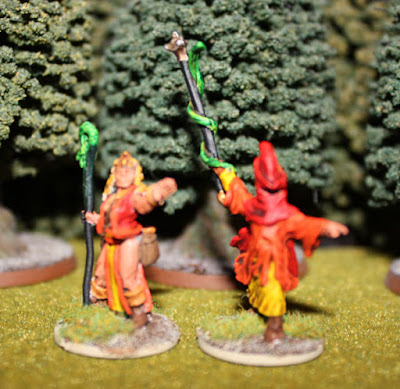 The final terrestrial element to be represented is Water. This is a Citadel wizard from the early eighties. As he had fantastic flowing cloaks I decided water would be the best element for him. 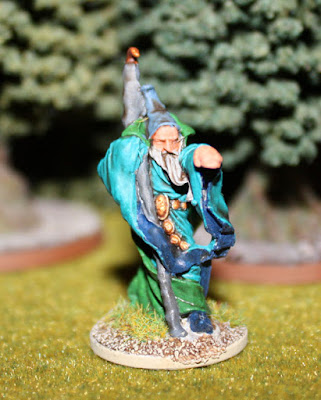 Finally, here's a shot of all the wizards together. Ordinarily they wouldn't mix company but they made an exception for this photo shoot. The only element missing was the Fifth Element - The Void. I have yet to strip down another batch of old mage figures, many of which can be used for the five schools of magic. 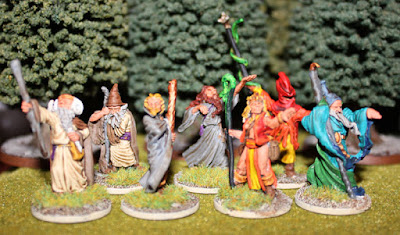 Hopefully, this week, I'll get back on target and start to paint more of the backlog. Normally I have a fair few half done, but I don't at this moment, so I am not sure what will be next up. I have two giants grinning at me, and a batch of 2000AD Judges ready to go. Perhaps it will be either of those batches of minis, or maybe something else will grab my attention?