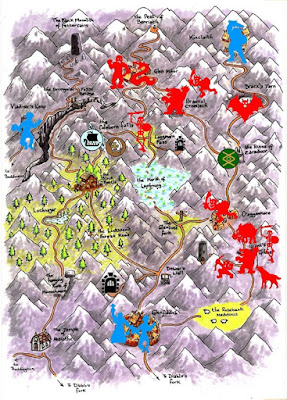 Bash the Cleric and Rollo the Barbarian shrouded in white mist, could hear nothing but the crashing of the Coleburn Falls. Communicating in gestures and covered by Strongbow, they cautiously picked their way from one mossy rock to the next until they reached the eastern bank. There, with weapons ready and their eyes honed on the tree line, they waited for the mercenary archer to join them. The feared ambush never came. Judging they were safe, they sought dry wood to kindle a fire.
“Lunch time!” declared Bash, his broad hands rubbing his questionably empty belly.

Xox the Ranger glanced back towards the village of Cragganmore. Goblin warriors frantically searched the buildings and outhouses, overturned wains and barrels, but their quarry had fled. Crouching low and running just off the road, Xox headed north.
The sun was at its zenith when flitting between the tight shadows, Xox the Ranger crept into the ruins of Edradour. He paused, breathing lightly. He heard the clatter of a cooking pot and the lilt of a broken melody playing on unseen lips. Winding between the crumbling walls, he followed the tempting smell of rabbit stew, his feet noiseless on the fallen stones. At last, ahead in a small hollow, he saw Sirrus the cutthroat. His back was turned as he leant, ladle in hand over the pot. The whistling stopped as he raised the stew to his lips. He never tasted his meal, for a bright arrow, whistling its own swift song of death, slammed into his back. Sirrus shuddered and fell, turning the pot over and sending its contents hissing into the fire. Xox swore. He was hungry and that stew would have been a welcome, additional bounty.
Casually Xox walked forward and retrieving the arrow from the dead cutthroat whose purse yielded a single gold coin. Xox pocketed the money and set about the task of pulling rabbit meat from the wet ashes.

Secundus the Mage rested his hand on the ancient, lichen-speckled stone door of the crypt. His fingers traced the worn indentations that were once deep-cut runes. The rumours were true. These markings proclaimed to all those who could decipher their meaning, that this was indeed where, in ages long passed, the Shadowsphere was buried. By whom and why, no one this side of the grave knew, but Secundus the Mage was here now, in sight of Longmorn Pass, to bring it back from its long, uninterrupted sleep.
The cold door yielded to the gentle pressure of his palm. Then, with his staff glowing with magical light, Secundus cautiously stepped into the black maw of the tomb.
Carved deep into the solid rock, the tunnel led down deep into mountain. Secundus walked on. Finally the passage opened into a square-cut chamber. The Mage held his glowing staff forward, casting rays of glittering light on to the low ceiling and solid walls. Only the far end appeared shrouded in darkness. Secondus stepped forward, yet still the blackness held. He then understood, for while the mage’s light penetrated the darkness, in that sepulchral shroud the light stayed, devoured by the all-absorbing artifact that was the Shadowsphere.
Suddenly a shrill scream shattered the silence. From the wall of dead black burst the twisted, near-human forms of snarling goblins, their savage blades shimmering in the magical half-light, their wide eyes burning with rage. Caught off-guard and awestruck, Secundus spat words of power, but the fiends were upon him. The first blade struck, carving deep and crimson. The mage’s staff fell. Its light fled into the hungry void.
The subterranean night closed, granting nothing but pain and screaming death.
Posted by Little Odo at 22:18