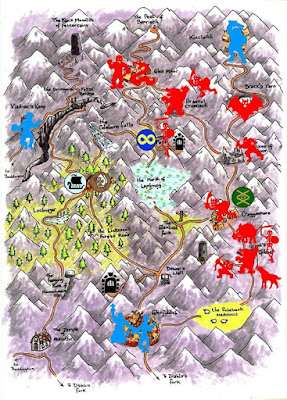 An owl screeched. Xox the Ranger stopped, breathed a sigh of relief and slowly crept forward. Cautiously he approached Cragganmore's inn. Bright yellow light shone through the leaded windows. He carefully avoided its beam until he stood pressed to the cold wall next to the closed casement. The ragged sounds of revelry, shrill, inhuman singing and the wanton smashing of bar-room furniture crashed into the night. Xox leaned into the light, peering through the rippled glass. A scowl passed over his illuminated face for the inn was full of cruel, swaggering goblins, who though full of drink and plundered meat were hungry for bloodshed and full of the savage powers of the night. Xox skulked back into the blackness and into the shelter of an abandoned stable.

A stair creaked beneath the heavy weight of an armoured boot. Xox the Ranger's eyes flashed open. Again a wooden groan broke the silence. It was no dream. Swiftly Xox sprang to his feet. In a single motion he stood, his short-sword naked in the half-light. Suddenly, the goblins were upon him, their eyes wide; foul, unintelligible curses on their black, curled-back lips. Xox's blade flashed, smashing the goblins' wild strikes aside and forcing a wide gap between them. He plunged forward into the open rift and through the yawning window. Down he fell, landing softly in the soft load of an abandoned haywain. He roiled and in an instant was on his feet again on the hard, wheel-rutted road.

After pocketing the gold, Rollo the Barbarian sheathed his sword and exclaimed "The dust from those cadavers has left a foul taste in my mouth and your magics have left my head reeling. I need a drink. Let's off to the Black Bottle inn where we can purchase a fine flagon of ale and spin some tales of our famous victory."

"Meeeee?" gasped Bash the Cleric with feigned horror, "Me, head towards an inn?" It was not only Strongbow the hireling archer whose eyebrow noticeably raised. "Well," continued the holy man, "since dawn is now breaking, I'm sure we can all benefit from a hearty breakfast. You've convinced me!"

Rollo laughed and slapped his companion firmly on the back. Bash stood up, dusted himself down and led the way.

It was a tiring trek along the steep and winding track of the Linkwood Forest Road. Unable to bear the maiden An Cnoc’s incessant whining, Rollo the Barbarian finally hoister her onto his broad, manly shoulders and carried her, saving her delicate feet from further trauma. Strongbow the hireling archer redoubled his watch, scanning the tightly packed, moss-hung trees crowding their path, wary for any signs of lurking foes. Finally, scouting just ahead, Strongbow silently signaled to the party to halt. Rollo lowered An Cnoc gently to the ground. She thanked him with a coy smile and gentle blush.

Rollo and Bash crept forward. Through the trees ahead they saw the Black Bottle Inn and staring back at them, Cobra the cutthroat, his long, curved dagger drawn. The corners of his mouth curled wickedly. Bash swiftly recited an ancient canticle and a strange stillness descended. The sly smile fell from Cobra’s lips. He frowned and gritted his teeth, yet soon the passing discomfort dissolved. The cutthroat’s eyes gleamed once more and before Strongbow had strung an arrow the morning air clouded before Cobra as a black swarm of blood bats gathered at his command. An Cnoc swooned. Rollo drew his sword and roaring like a bear at bay plunged into the screaming fog, his shimmering blade whirling before him like a stream of liquid silver until drenched in scarlet rain he stood seething before the lone cutthroat. The bats silent, slaughtered and now nothing more than a quivering crimson carpet at the barbarian’s sandaled feet.

Bash rushed forward his quarterstaff raised. With a treacherous sneer, Cobra the cutthroat lunged with his long, curving dagger towards Rollo’s unguarded loins. Swift and agile as a cat, the barbarian thrust the hilt of his heavy sword hard against the flashing blade. The dagger struck hard steel and shivered. The force of the parry threw the cutthroat back, his hand torn beneath his glove. Then Cobra froze. His wide eyes fell in startled amazement to his chest, pain-wracked and transfixed with the quivering arrow of Strongbow the archer. He struggled to curse his killers but only a crimson flood passed his lips and he fell silent to move no more.

An Cnoc was carried to the inn where the patrons cheered their deliverers. Strongbow took the cutthroat’s purse and split its two Gold Pieces evenly between the heroes Bash the Cleric and Rollo the Barbarian.
Posted by Little Odo at 19:44