I managed to get a batch of fantasy fighter figures completed over this last week. The fighters in this picture are a batch of early Citadel and Ral Partha minis. I was pleased with the shield on the figure on the right when I first finished it, but looking at it closely it is not as nice as I first thought. Still, it is freehand and from above the tabletop it looks quite good - which is the effect I am aiming for. 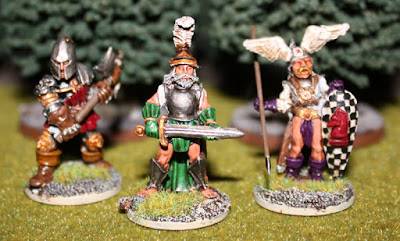 Here are three female fighters. I don't know why, but the sculpting on these is not as good as the male fighters even though they are from the same ranges. The figure on the right must have had a nightmare coming out of the mould as the face is really bizarre. 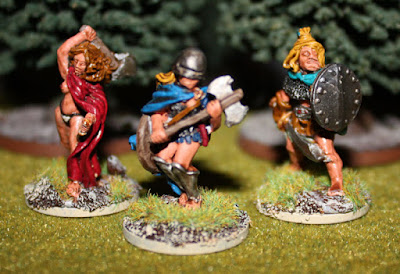 In the next picture are two fighters from Denizen Miniatures. Another couple of male fighters. One seems to be of Norman descent and the other of Greek. I'll use them as generic fighters but this will always be at the back of my mind. I tried to find an appropriate shield design for the "Greek" fighter but due to the curvature of the shield none of the stickers would adhere properly. I wasn't brave enough to freehand paint anything this time. Maybe next time I get a figure/shield similar to this I will give it a go. 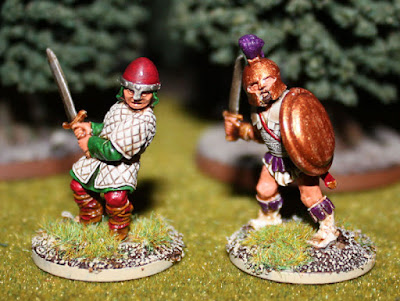 Finally, here's a picture of the whole motley crew. A nice batch of mercenaries if ever I saw one.

Next week should see some more orcs and dwarfs for Hordes of the Things. I also have a few more villagers (a crone, some kids and their mongrel pooch from Warlord Games), another troll and a few other bits and bobs in the pipeline.
Posted by Little Odo at 20:20