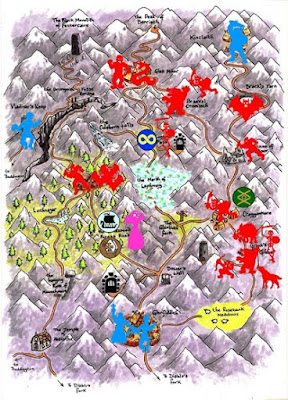 Rollo the Barbarian ripped his sword free of its scabbard. A yard of shimmering steel glinted in the pale moonlight. An Cnoc cowered behind him, clinging to his broad shoulders, unable to tear her terror-filled eyes from the horror ahead. Gulping back his superstitious unease, Rollo stepped boldly forward, the hard point of his great-sword pointing at the hollow ribcage of the dreadful abomination slowly shambling towards him. He halted. An Cnoc screamed. Unable to further bear the living nightmare, she finally fainted as from the blackness each side of the endarkened path, staggered another clawing, fleshless cadaver. His jaw fixed, his teeth gritted, Rollo swung his bright blade high above his head and rushed forward. There was a blinding flash and the barbarian fell to his knees. His head swimming, he shook free his confusion and stood, raising his blade once more, but he saw no skeletons before him, but a figure that while fully clothed, was by anyone’s measure, clearly not lacking flesh.
“Bash?”
“None other!” replied the Cleric who walked past the dazed barbarian and knelt over the swooned maiden. He mopped her brow and her eyes flashed open. Her waking terror fled as she saw the holy man’s generous features. Grateful for her deliverance, she threw her arms around him and wept.
Rollo stoically shrugged.
Bash turned his head, “You guarded the maiden well Barbarian, but we must now dice for the single Gold Piece worth of treasure my hireling Strongbow has gathered from the piles of bone-dust scattered here about”. Rollo smiled and the two heroes rolled dice. Rollo gleefully pocketed the treasure. Fate and the gods it would seem saw fit to grant him at least some compensation.

Secundus the Mage saw he was surrounded. Calmly he raised his staff above his head as the wind filled with his words of arcane calling. Flames shot from dark earth about him, forming a perfect circle of fire. There he stood, defiant, protected by the scorching blaze as beyond its flickering, orange light the skeleton warriors stood, unceasingly beating their shields.