Over the years I have put together a list of blogs I frequently read. I was perusing through my list of preferred blogs the other day when I came across one in particular that keeps me up to date with what is going on in the world of Dungeons and Dragons - Bat in the Attic. What got me interested this time though were a couple of blog posts about a new roleplaying game (for me anyway) called Adventures in Middle Earth by Cubicle 7 Entertainment. I had never heard of this company before but apparently they are famous for their Middle Earth roleplaying game; The One Ring. It seems that Cubicle 7 have managed to grab hold of the 5e OGL (Open Gaming License) and are now busy converting the wealth of material available for The One Ring into the new 5e D&D format.

As a sucker for all things Middle Earth I went straight out (well linked to their webstore) and bought a few items to get me started; the Players' Guide, the Loremaster's Guide, an adventure pack and a Loremaster's Screen (which also has a beginners adventure). 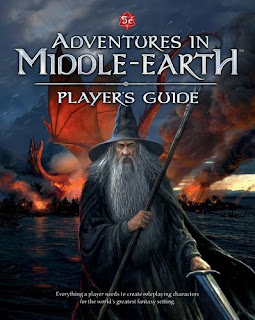 I have only really read the Player's Guide so far but it seems that the world they are wishing to convey is heavily influenced by Tolkien's books but with the choice (with a little Loremaster input) to set it in any type of Middle Earth the playing group desires - so you can make your vision of Middle Earth with as much or as little magic as you require, or even set it in Peter Jackson's film version. 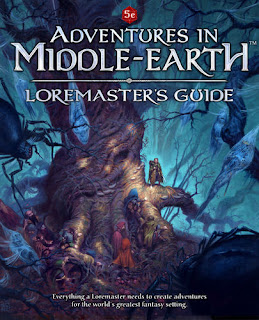 I have only just begun to read the Loremaster's Guide, so cannot really say much about it yet. My one take-away from a quick skip through is that it is also a very well put together manual, conveying a conscious effort by the publisher to bring a quality product to the market. I wll try to get through this book over next week and and then take a quick peek at the adventure modules. 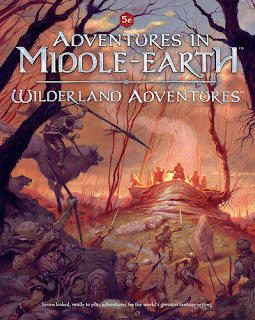 The setting for these books (from what I have read so far) is in what they call the Widlerlands - an area that encompasses basically from the Misty Mountains eastward to Rhun. At the moment they do not cover the Shire, Gondor or Rohan to name a few but the playing area is not limited by any means as adventuring can take place in dungeons deep and caverns old, the Lonely Mountain, Mirkwood, Dale etc. 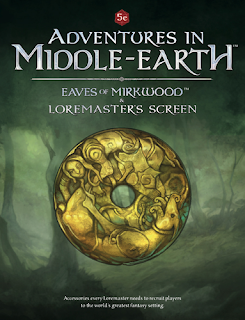 Period wise, the setting is just after (approximately five years) the defeat of the goblins, wolves and bats at the Battle of the Five Armies and the fall of Smaug. Dale and Erebor have been rebuilt/recolonised and wealth is flowing from this area prompting the adventurous sort to get off their comfy couches, put on their walking boots and head out into the Wilderlands to help expand King Bard's benign hegemony.

As an aside, but relevant to this topic, one of my gaming buddies from the RP Haven contacted me a few days ago about getting involved in a D&D 5e game set in Ravenloft. Whilst we chatted about the game I mentioned Adventures in Middle Earth and he replied that the gaming group were looking at maybe delving into that arena after the 5e campaign closed. As RM is down as a temporary DM for a while if the current DM needs a break, I said that I would look into running a brief AiME 5e adventure when our Ravenloft adventures come to an end.

It looks like gaming may be picking up again for me after a few years in my own wilderlands (lots of personal stuff has happened in the last two years, of which only a fraction has been mentioned in previous posts - hence the lack of posts for quite a while, but hopefully that will be changing soon).

Anyway, back to my purchases. From what I have read so far, I am happy with the books. They are lavishly presented and even if I never get to use them, they have so far been a great source of information about the Middle Earth period in question. I daresay that I will pick up more of their adventure and location supplements as they are released (I am already a few behind, so once these ones have been read, I will undoubtedly purchase more of those that are currently available). If rumours are true, they will eventually be expanding (once they convert their One Ring stuff to 5e) from the Wilderlands setting into more familiar territories over time, so my favourite realm of Rohan may be given the special treatment.

Me finding the Bat in the Attic posts was quite serendipitous as I was just at the point of sorting out my GW LotR: SBG figures again. I have got the Gondor troops out of hiding and I am looking at what needs doing to complete a few squads of Warriors of Minas Tirith. My new house has a huge south facing bedroom window, that lets in plenty of light. Today I have just moved an old desk into the room as my painting station so, hopefully, I will be able to sort out my miniatures into their rightful armies and get prepped for a summer of painting.