Blood Bowl and other stuff 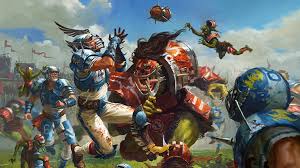 Over the last couple of months, my youngest son (now aged 9) has really got into gaming in a big way. He had been watching numerous YouTube videos and then he asked me for some figures. I bought him a stack of second hand Lord of the Rings minis but these weren't quite what he wanted. So, for Christmas last year and his birthday this year he was bought a load of Games Workshop miniatures (after he had purloined my Night Goblins). The boxes he has got so far are as follows:

All of these have been de-sprued and glued up except for the last box of Ogre Warriors - due to his age, I will not let him near a pair of side cutters and glue, so I have done this for him. I am due to make the Ogres for him sometime later this week.

Anyway, whilst his interest has grown in "The Games Workshop Hobby" he has diversified his interests a bit whilst waiting for the weather to turn so we can get in the garden to undercoat his Warhammer miniatures. He has now got into Bloodbowl. He had saved up his Christmas money, birthday money and pocket money to buy himself the boxed game - he is determined in his goal if nothing else, as the box set cost him £65!

I broke open the very heavy box a week or so back when he brought it back from his mum's and took a look at what was on offer. Inside the box you get...
I started reading the rules the other day but my son managed to get a quick play session in at the GW store closest to his mum's. He also got in a painting session and an Age of Sigmar overview too, along with several more sessions lined up in a children's loyalty scheme GW do called Crusader (I think).

Anyway, whilst I struggled to find time to read the rulebook, he just dived straight in and made up his own game based on the run through he had at GW. He is loving it and is constantly telling me the scores of each match he runs (every day after I pick him up from the childminder).

I am not a great fan of GW's canon (except Lord of the Rings and a little bit of Warhammer Ancient Battles back in the day) but I have to take my hat off to their customer service and support. My wife is not a great fan of gaming full-stop, but even she got involved on one of the trips to GW and painted a Space Marine - she actually admitted to enjoying it!

Back to Bloodbowl though - I am hoping to get the rules sorted and get a game played in the next week or two with my son, and we may get a league going with his older brother too - the girls aren't interested at all. I have been out of gaming for a while due to lots of personal circumstances mentioned in previous posts, and this may just prove the catalyst (along with a new D&D 5e Ravenloft campaign I am due to start in next week) to get me going again with my miniature gaming.