To fill the gaps in my Gondorian army I turned to EBay at the beginning of this month in order to get the rare and out of production (oop) items I need. They have all now been delivered. I think I got them all at a reasonable price, as they were all bought at less than their current or original, if oop, RRP with postage included. I was able to grab plenty of heavy weapons crew too, so I should now have enough to man all three of my artillery pieces. 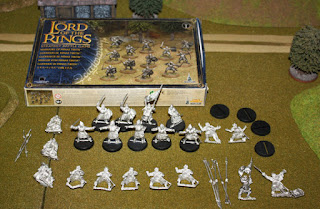 I also picked up a few figures (Guardians of the Fountain Court and a second pose of Faramir in armour) that were not on the list as they were available at a good price and will fill a gap as bodyguards to Denethor (I just need one more Fountain Court Guard to make the four as depicted in the films). The extra box of Warriors of Minas Tirith is of the 24 variety, and I got it as BNIB for only a quid or so more than a brand new box of 12. This was an offer I could not refuse as it will allow me to create the two extra converted units I am looking at doing.

To complete the army I require just two more boxes of Gondor Knights, one box of Dol Amroth Knights and a couple (Osgiliath Veterans and Citadel Guard Archers) of blisters, which I will most likely get direct from Games Workshop as they are all still available.

Over the next few days I will be cleaning them all up (I have done some already - those that are in the slotta bases) and preparing them for undercoating along with the other minis I already have in the collection. The weather has been a bit rotten recently so I have not been able to get out and use the spray can, but as soon as the sun pops out again I will get out into the garden and undercoat as many as I am able to.

The painting of the basic warriors is coming along slowly in the background and I should hopefully have something to show you all in about a week's time. I am almost finished that unit of 12 archers - the block painting is done, now they need a bit of drybrushing and a few washes to complete them.