After a 10 month hiatus, I signed up for a new game at the RP Haven. As I had bought the D&D Starter Set when it came out, I thought I would put my scanty knowledge of the game to the test. I signed up for a brand new campaign that should be starting in a couple of weeks' time. 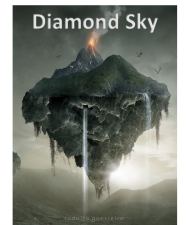 A long time ago all the races of the sky lived on the ground - not on nomadic floating islands called "Rocks". Everyone was a slave, bred from a mix of stock over the millenia, under the control of a powerful reptilian race known as the Old Ones. With each dynasty their Empires grew ever more powerful and with their mastery of magic they grew too confident. One day, the sun went black and darkness fell across the land. In this darkness a mighty evil came forth to claim the surface of our world. The Old Ones, reliant on the power of our sun, fled up the tallest mountains and took shelter from the wastes below whilst our slaves armies fought and died in an increasingly toxic atmosphere.

The Old Ones died out during the great eclipse. The warm-blooded stock races survived. All the remaining peoples - Dwarves, bred for construction - Elves, bred for pleasure - Beastmen, bred for war - discovered their own unique way of survival against the rising threat of the world below.

Now, with the power to maintain flight, the races have reestablished a civilization above the clouds. Entire cities are built on the biggest Rocks, whilst a single oasis might exist on another. Most Rocks float about on the winds without any external influence - called Nomad Rocks - whilst others are curated and guided by their inhabitants to become something of a gliding metropolis.

Lost magic, swashbuckling jet-pack pirates, wind-based navigation, powerful gems and abominable monsters are what life has become in the world of the Diamond Sky.

As mentioned previously, this will be played using the new D&D 5e rules. So, as a diligent player I popped onto the interweb and purchased the new Player's Handbook. Rather than go to Amazon (who expected me to wait 3-6 weeks!) I found a new independent book company called Wordery who got it to me in 2 days with free postage (anywhere in the world). I suggest everyone maybe look them up for future purchases as they are also as economical as Amazon - in fact they are cheaper today (by £4!) than they were when I bought the PHB two days ago - aw, nuts!