Frostgrave - What's in the Box?

This took a little longer to get round to than I first thought. Wednesday saw my first gaming session back at the RP Haven (more on that tomorrow hopefully), and Thursday evening was taken up with my usual hill running stint with a couple of my running friends. Last night was just a relaxing night after a long week at work.

Anyway, onto the main point of this post - Frostgrave. When I heard a few months back about the Nickstarter that was happening in July I was immediately intrigued. Fantasy is probably my favourite genre for gaming as I cut my teeth on Dungeons and Dragons from way back in 1979, and have pretty much played or read it since. I have played a wee bit of historical gaming lately too, but fantasy does keep rising to the fore... Songs of Blades and Heroes, D&D, Dragon Warriors, Lord of the Rings:SBG, Savage Worlds and so on.

So, around April time I had my eyes open for a couple of tabletop skirmishing rules for fantasy that were due out soonish - Frostgrave (July) and Dragon Rampant (out December I think?). As mentioned in the previously post I have never succumbed to a Kickstarter but as this one for Frostgrave was only for a relatively small amount of outlay (depending on the level you enter the scheme) I took a good look. Rules and figures in a complete set for a reasonable price. I ummed and aahed and then jumped in right at the top level after a little encouragement from my wife.

Here is what the whole pile looks like, sorted into a little order... 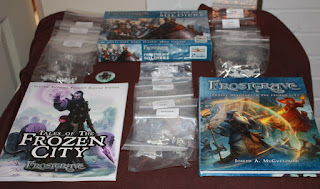 Here is a better picture of the main components of the order; the good quality hard back from Osprey (better known for their range of military guide books) is the main rulebook and the softback to the left of the picture is a collection of short stories set in the world of Frostgrave (there is also a download available on one of the sheets mentioned above). The badge was a nice little surprise but the plastic soldiers were one of my main draws - so I can compare them to the plastic miniatures from other manufacturers that I have previously bought. 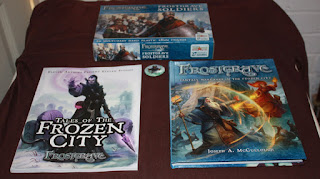 This is a picture of what was inside the figures box. There were 4 identical sprues each containing 5 warrior bodies and a great variety of weapons and accoutrements. I will have some fun putting these together. Also, each warrior comes with a separate plastic round base. The 9 items at the front of the picture show the 6 basic treasure markers and 3 advanced treaure markers made of a good quality resin. 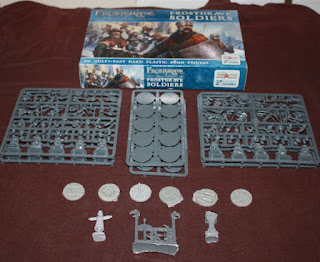 Now onto the metal miniatures. Each bag contained a wizard and his/her apprentice. These represent the 10 classes of magic available. I am looking forward to seeing what these are and how they function. 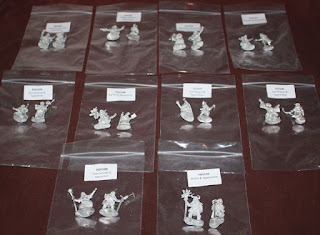 Next up are the four sets of henchmen. The first set certainly nods towards the two Fritz Lieber characters Fafhrd and the Gray Mouser. The other three sets include a variety of heavies and supporting cast. 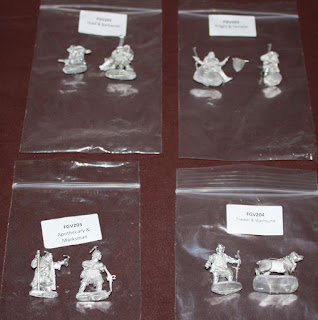 The remainder of the box included the stretch goals. For my level of pledge I received an extra knight miniature, a representation of the Lich Lord (linked to the next set due out apparently) and a small metal treaure chest. The other knight miniature was a consolation figure for the Nickstarter falling short of the next stretch goal by only a few quid. Nick (owner of Northstar who commissioned the figures for this game) has come across as a great guy here and compensated those of us who had supported his venture by supplying a Crusader Miniatures knight with two handed weapon as a sweetener. 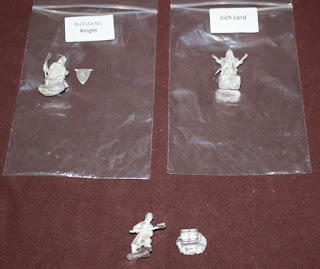 The final couple of items were two small sheets of paper that detail downloads for three screen savers for my computer and another book called Hunt for the Golem, which I am assuming is either another set of short stories or maybe a set of scenarios for the game. Hopefully, my next post will see me putting the minis together and prepping them for painting. I will also try to comment on the rules after a brief skim through and then after a proper read and first game.
Posted by Little Odo at 14:42