This is an account of the Battle of Imeryds Run that took place in the early hours of Moonday 15th Quinquember in the year 963 of the Cantwaran Era.

It came about because of the resurgence of The Temple dedicated to the worship of the demon queen of moulds and rot, Zuggtmoy, after a ten year hiatus. Bandit raids had increased and strange disappearances kept happening in the area around the town of Castleford.

A small band of adventurers got to the bottom of the plot when they destroyed an old outpost of the Temple that had been put back into use by a powerful cleric sworn to his mistress’s service. The cleric escaped the destruction of his fortified base of operations and took refuge in the run-down village of Nulb. The adventurers were able to track down his whereabouts and also how the Temple’s new recruits were hired and shipped to strategic positions.

The local Thuringian lords, under the command of the baron Tancred and his vizier the lady Mathilde worked together with the party to bring about the destruction of this racket and thus aid in the final destruction of the Temple.

This is the story of how the battle panned out whilst the adventurers nullified the high priest Lareth.

How it was done

The main battle was run using cut down AD&D combat rules. All To Hit rolls and Armour Classes etc. were standardised to make things easier. I think this would have played brilliantly if I had wargaming miniatures to hand but I had to make do with paper and cardboard counters (maybe I can re-run the battle using some commercial rules to see how it pans out?)

The entire battle was run outside of the gaming club and as luck would have it the combat within the Waterside Hostel lasted almost as long as the battle anyway making the end result the same due to minimal interference by the party (the only part extra was the defeat of the zombies and the capture of Lareth). 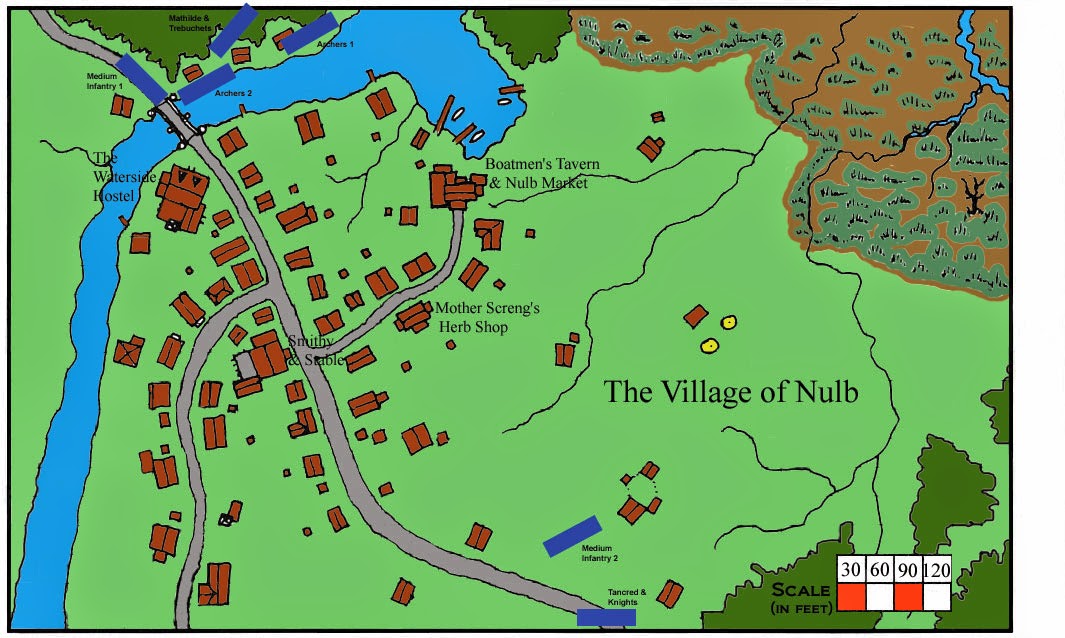 1.      Trebuchets open fire. First salvo is fireballs – one hits the pirate ship at first attempt!
2.      Thuringian troops advance. Fire damage on ship. Nulbians awake and raise the alarms
a.       30 archers to the shore and bridge
b.      30 medium infantry to the bridge
c.       30 archers, 30 light infantry defend the trebuchets and Mathilde
d.      30 medium infantry from the south move into the village
e.       30 knights hold position to cover the medium infantry south of the village
f.       2 lances patrol as lookouts for escapees
3.      Pirates return fire at the trebuchets with their now ready ballistae. One trebuchet hit and damaged 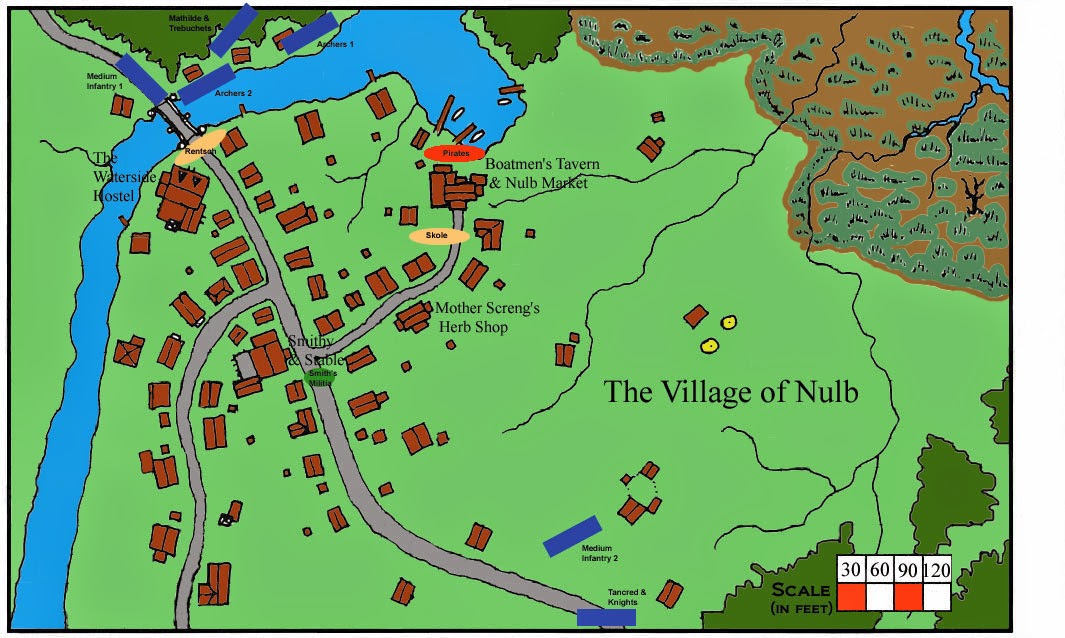 4.      Thuringians make it onto the bridge under cover of their archers. Dick Rentsch’s brigands join combat with the Thuringian troops on the bridge. Archers stop firing as they don’t wish to hit their own men and turn their attention to pirate ship instead. Trebuchet hits the pirate ship again (but only with rocks this time) 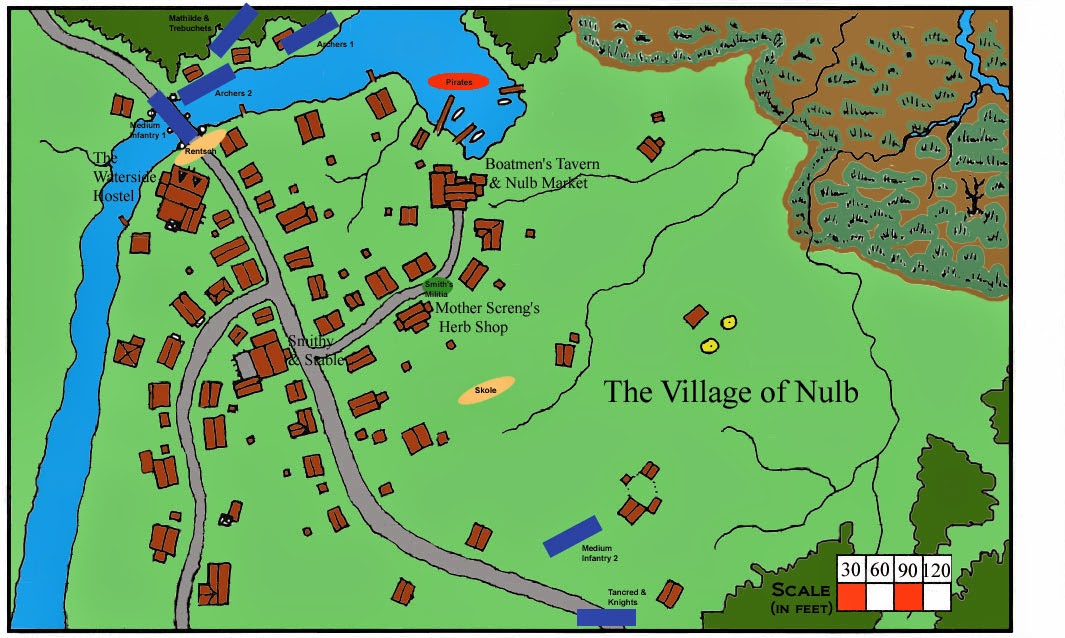 5.      All pirates on ship working to put the fires out, get the boat moving and return fire on the trebuchets
6.      Combat joined in the east of Nulb, Skole’s brigands versus Thuringian infantry (knights held in reserve). Smith and the villagers stand their ground apart from the combat 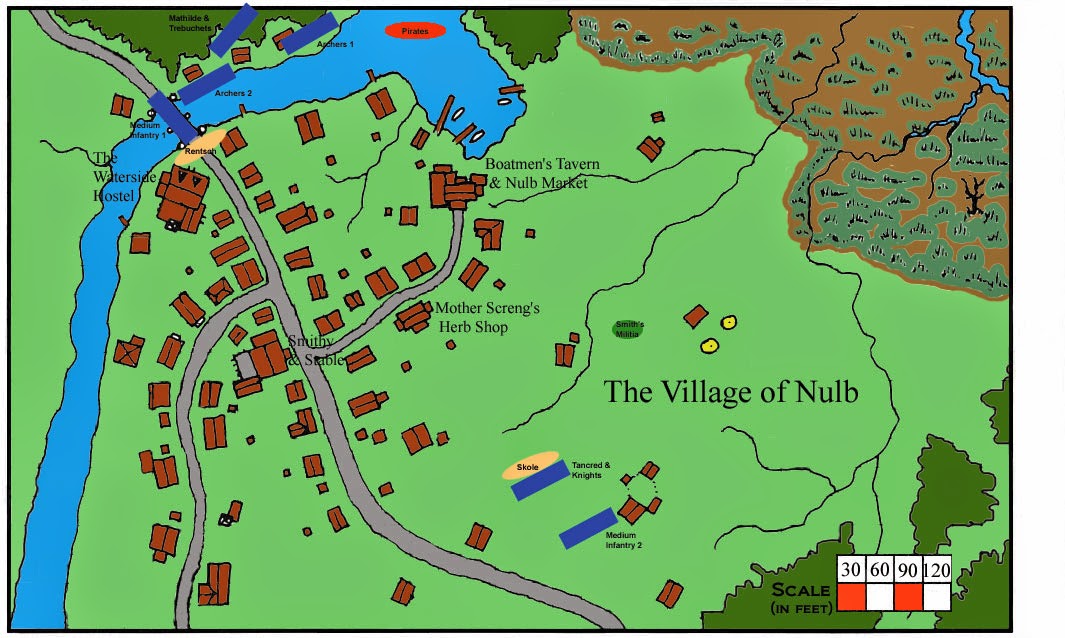 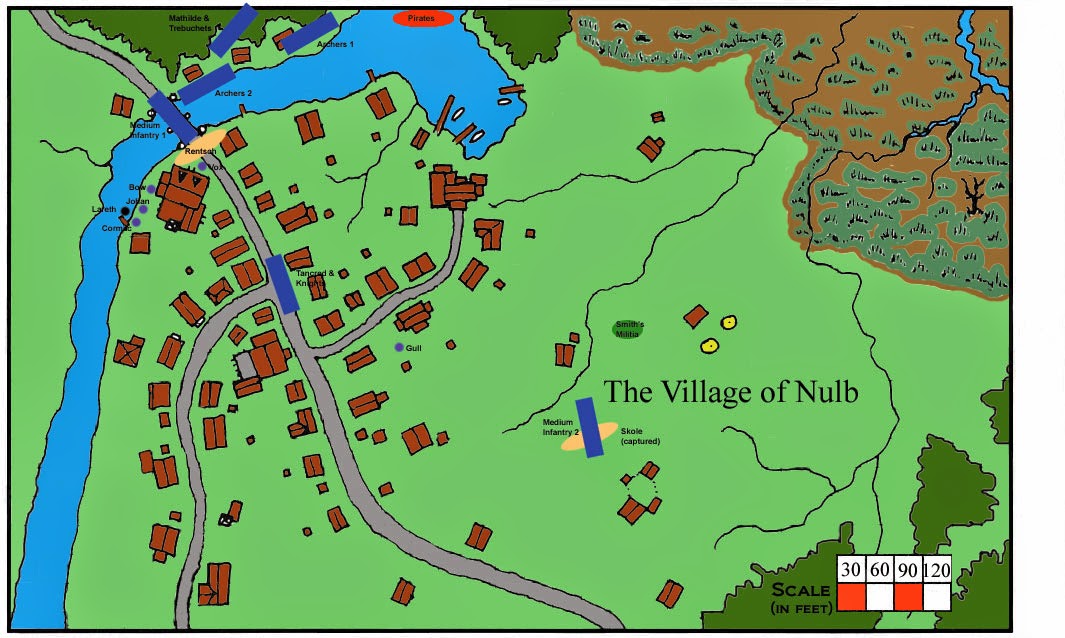 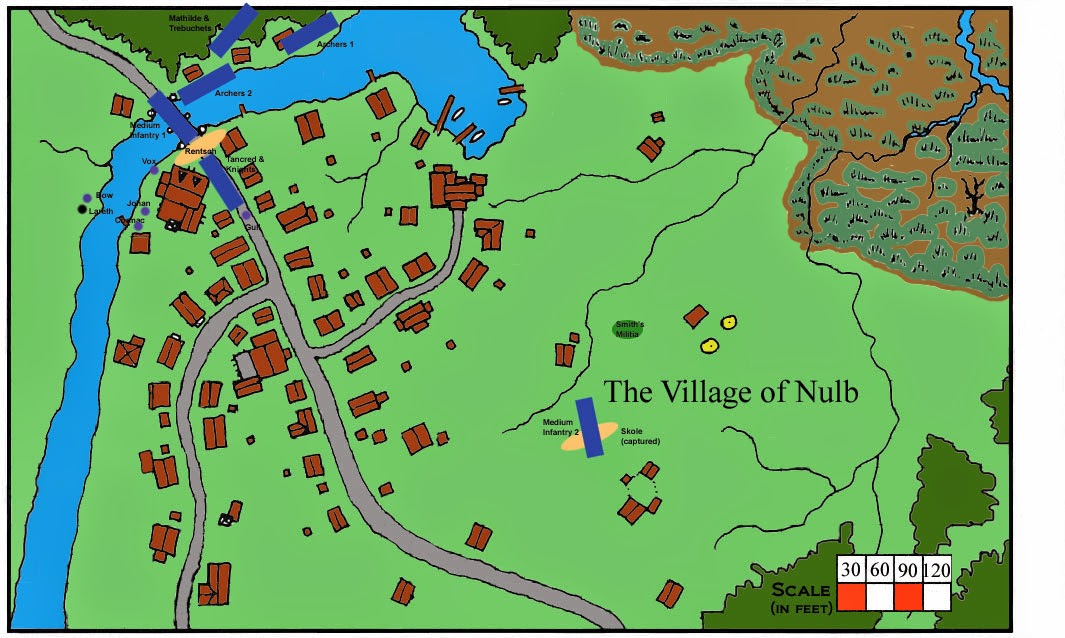 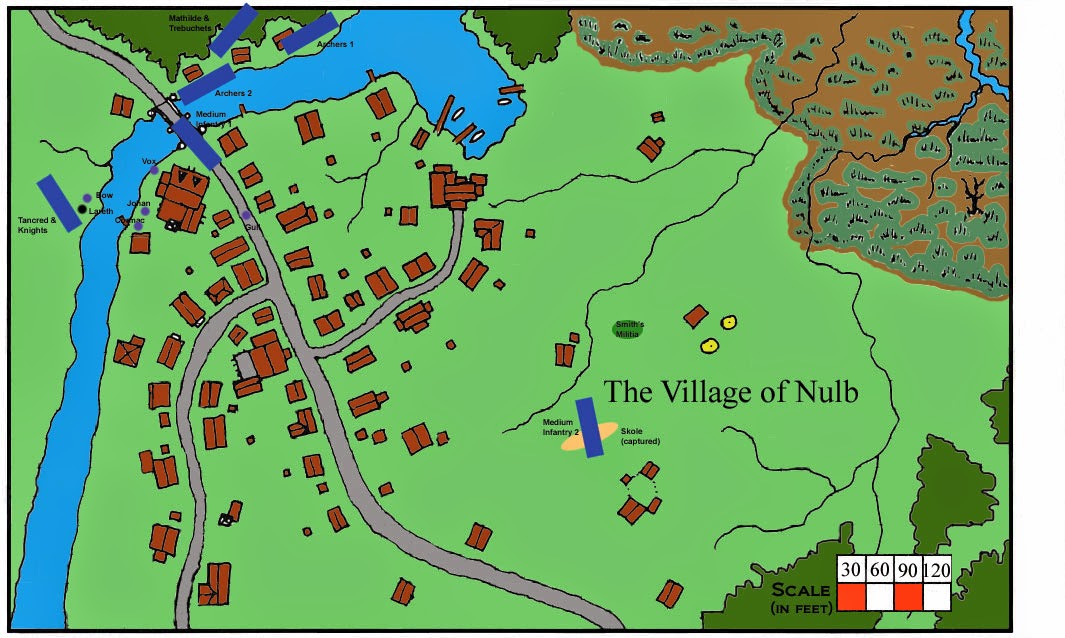 Aftermath – what the Thuringians do: