It has been a while since I attended Salute for a mooch around. I had a few items in mind to grab hold of, as well as use it as an opportunity to take a look at what else is about at the moment.

Alex and I made our way there a little later than usual (arrived around midday) and avoided the queues and the worst of the morning crowds on the travel system. We decided to take the bus to the O2 and then take the new Emirates Air cable car over the Thames. 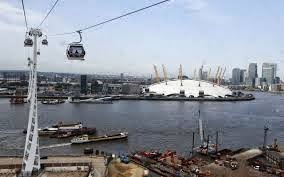 Although we had an easy journey there, we missed out on the goody bag when we arrived. I was not too fussed as WW2 is not a period I have really been interested in and the free figure would only have gone to waste anyway. That said, the lack of goody bag means that Salute attendance must have exceeded the organisers' expectations, which can only be good for the hobby.

I was able to grab the following on my meanderings around the cavernous interior of the Excel Centre...

3 pre-made, pre-flocked escarpment-type hills for my battle boards from Kallistra
The latest Wargames Illustrated with free Che figure (another mini I will not have a use for)
The latest Wargames, Soldiers and Strategy magazine
Saga rules, two sets of Saga dice and a warlord figure for Alex's faction from Gripping Beast
A few paints to fill gaps in my collection

I missed out on getting the trees I went for (I saw some nice ones at a particular stand but by the time I had wandered round and tried to refind the stall after my initial circuit the stall was nowhere to be found!) and I was going to grab some sculpting materials so I could have a go at conversions and making some simple items of my own, but the tools I wanted had sold out.

Alex and I enjoyed our sojourn to Europe's largest games show and will undoubtedly go again next year - perhaps to take part in a game or two next time if we go earlier. We decided to chat about our purchases and day out by visiting the Bavarian Beerhouse in Tower Hill on our way home. A fine venue with great Bavarian food and beer (although Alex was on the apple juice!). I have also been to the one in Broad Street, and the annual pilgrimage to Oktoberfest allows me to get my fix ordinarily.