The Hobbit: An Unexpected Journey

Well, I finally got around to seeing this film yesterday afternoon with a couple of the kids, and I have to say I was pleasantly surprised despite some fairly negative comments I have seen on the net. 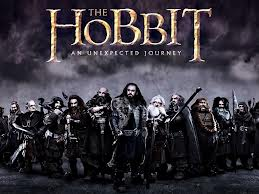 I felt it stuck to the book reasonably well, with a few diversions that fit into the canon (welcomed) and a few that did not (mostly they worked well). I especially liked the ways in which PJ got around the fact that in The Hobbit some of the animals are able to talk, but in the film he has made it that they do not - thus the (re-)introduction of a couple of deus ex machina to resolve the issues.

Many critics have said that the intro and meeting at Bilbo's hobbit hole dragged, but I found I enjoyed the slow build up without it dragging at all. There is a fair bit of light heartedness and the singing was actually good for the film - I am also happy to know the tune that was set to the songs in the books, so I can sing along with them (in my head) the next time I read them. They did not detract from the film IMHO - the Hobbit was a kids' book afterall and should be light hearted and full of song and cheer; plenty of time for it to get darker and match the tone of LotR later.

There have been a few new characters introduced, but none too obscure to detract from the film, and a few removed. I feel that Azog is going to be a recurring baddie (as opposed to, IIRC, his son Bolg in the book) - hopefully more use will be made of him than was Lurtz in the LotR films. Azog reminded me very much of the lead "zombie" in I Am Legend. Perhaps PJ changed the amount of characters to make things flow a bit better so as not to confuse the audience who have not read the books with too many adversarises that would otherwise just blend into one another anyway.

A few scenes from the book have been amended slightly for the film but the outcomes were still the same. There are a few new scenes too, but without going into too much detail only one didn't work for me - a chase involving Radagast the Brown - but the rest of his role as the bearer of ill tidings fit in nicely. There are glimpses of what is still to come in the next two films too.

My favourite aspects of the film, other than a reasonably good rendering of the book, are the mounted elves (awesome), the hunter orcs and dire wargs (brutal), and the fact that the animals do not speak (although I suspect Smaug will be a speaker - but maybe/hopefully by some form of telepathy?)

As we walked out of the cinema both of the kids said they couldn't wait for the Blu-Ray version, and have since said they want to go to see it again. I am more than happy to oblige them.

My wife, who is not at all into fantasy or sci-fi stuff, has said she will take a trip to see it on the feedback she has had from us all. Previously, she has fallen asleep during LotR and a variety of other sci-fi films I have taken her to see, but I think she may just stay awake for this one. She may have started to see the light when it comes to sci-fant films after being subjected to the first of the Alien and Predator films during the Christmas break, and saying that she actually enjoyed them!

From a gaming perspective, there are a few battle scenes that can easily be recreated on the tabletop, and seeing the miniatures released by GW, the whole film will be easy to recreate - although where I am going to get several hundred goblins on the cheap I do not know :-)

Overall, I would give this film about 8.5 out of 10. I thoroughly enjoyed it for what it was, and it was actually better than I anticipated. Now to get on and paint those figures I bought just before Christmas so I can plan an Escape from Goblin Town.
Posted by Little Odo at 17:44