It was a bright, sunny day today here in the wilds of Kent, so I gathered up the tribe to repel those Imperialistic Roman invaders. As the fortresses around here are a bit beyond the ferocity of even my tribe, it was decided over the plum duff to take in force one of the local villas. We pored over the map for indications of weakness and planned our attack with precision...

We would head for Lullingstone Roman Villa located in Eynsford, Kent. We haven't had a day out with the kids in ages, and as the sun was shining today (we have had solid rain for the last week and a half) we decided to head on out for a bit of fun and education. I have been to this villa on several occasions and many years ago, on its grand re-opening, I was invited along with the rest of my archaeological research group to a cheese and wine party. 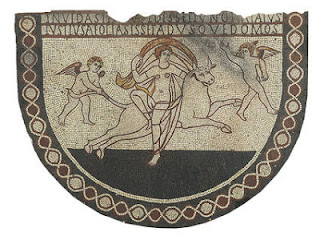 It is a grand villa with a very fine central mosaic (part of which is shown above). The new(ish) display hall has plenty for the kids to see and do, and kept my lot entertained for an hour and a half - not bad considering my youngest is only 3. The gift shop has been revamped and includes lots of goodies, so we were able to grab a handful of cakes on the way out for chomping in the car on the way home. I also picked up a bottle of plum wine and spelt beer to have with my cheese, biscuits and pickles tonight whilst slumped in front of the TV - heaven!
Posted by Little Odo at 18:58