I managed to complete a few figures this morning. It has been a while since I actually finished anything, but I feel better now a small space has appeared on my paint station. I also managed to clean-up, base and undercoat a big stack of Norman cavalry. These will eventually form four conrois of knights.

Anyway, here is a picture of Korum Proudfoot - my latest AD&D character... 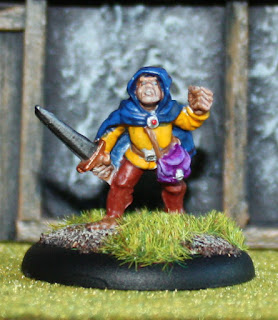 This miniature, by e-M4, was bought from Forlorn Hope games and cost just over a quid! Result.

I may grab a few more from them over the coming weeks to knock up a selection of demi-humn adventurers; of which I have a severe lack.
Posted by Little Odo at 17:33