The cast of heroes


That afternoon, after everyone had rested, it was decided to make safe the tower and camp there for the night before heading on further into Troll country. The horses were unhitched from the cart and led into the ground floor of the tower to keep them safe from any night prowlers. Korum remembered he had not searched the rest of the upper storey so he proceeded back to the cupboard that had not been opened. Inside he found three scrolls; two were obviously magical and were handed to Arken for safe keeping until they could be handed over to Rioja the mage. The third scroll, however, told of the previous resident’s experiments with spells and of a large underground complex that was set up to see what could be done with it and the spells cast upon it if left to its own devices afterwards. Vague directions to this complex were given, but it could be told from the description that it was less than a mile away.


As the party started to settle for the night there was a rapping at the door. Bardan raised his axe whilst Arken ushered in a weary traveller in need of food and shelter. This new arrival seemed trustworthy enough, so the party shared their rations with him and swapped tales of adventure. The rest of the night passed uneventfully.


The party of adventurers set off in search of the dungeon complex with their new ally, Damien, in tow. After an hour or so of looking, Knil finally stumbled across a small hand dug opening in the side of a hill. 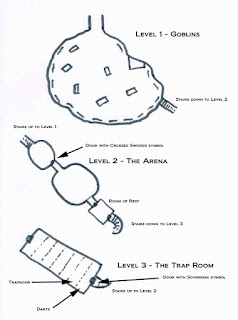 Korum took the lead in heading on down the corridor revealed, closely followed by the two fighters. A short distance into the hill they espied a large cavern, which was lit by torches. The walls were decorated with crudely stitched together tapestries of mismatch hues upon the walls. Tables and beds were strewn at random across the floor and a cage was positioned off to the left hand side. The ten or so goblinoid inhabitants were not happy at the intrusion and started to advance upon what they thought was a singular Halfling – meat was back on the menu for tonight. Korum spoke to them in their own language, trying to placate them and buy time for his support to arrive, asking them about a hidden complex in the hills. This forestalled the main goblin, who glanced over his right shoulder in the direction of a particularly drab hanging, before starting to draw his rusted scimitar. The party, meanwhile, had readjusted their order, drawn weapons and prepared spells. The ranger stepped up next to Korum and they let loose their darts into the midst of the advancing warband. The two fighters peeled off either side and hugged the walls in the hope of gaining advantage from a pincer movement. The cleric cast his summoning spell and a dust devil kicked up in the midst of their adversaries. The fight was short and brutal; the goblins went down in a flurry of blows in the space of a few short minutes until only one was left. This final critter was grabbed by Bardan and slammed against the nearest wall, knocking it unconscious.


This lull now gave the party time to investigate the rest of the cavern. The crude tapestries were just what they appeared; decorative items, except for the last one that was in the direction the goblin glanced over its shoulder. Behind this particular tapestry was an iron-bound door covered in runes. Nothing else was found of value in the room.


The goblin finally came round from his stupor and was coerced into giving away the location of his treasure: it was buried in a shallow pit beneath one of the tables. This amounted to 20gp per party member when divvied up, and a magical cloak which Arken saw fit to purloin for further study. The goblin was bundled into the cage for safe keeping, but as he posed too much of a threat (in case more of his brethren returned later) and begged for release from this cruel world, he was put to the sword.


The party returned to the door to attempt to decipher the runes and see what lay beyond. The runes were beyond their skills to interpret for the moment, so Korum started to copy them down for later study. The rest of the party, meanwhile, tried to figure out how to get the door open, when the lock suddenly clicked and the door popped open just as Korum finished writing the runes down. Puzzled but not worried, he pushed open the door and proceeded down the magically lit corridor. This short corridor headed down a slope and ended in a small circular room with a door opposite the entrance the party came in. Above the door opposite was a pair of crossed swords. Korum proceeded boldly across the room and easily popped the lock, but the solid metal door would not budge. Each fighter took a turn but only managed to injure their pride. It was decided after a short while to tie a rope to it and have the three strongest party members pull it open. It took a while but eventually ground open despite the hinges being well oiled. The party advanced through, but before anyone could think to prop it open, the door slammed shut on them. There were no locks or handles on this side; the party must advance never to return.


The opened door revealed a short corridor leading to an arena with a portcullis opposite the entrance the party were positioned in. Not quite sure what to make of this, the party stopped to consider their options. Bardan, however, heedless of danger strode into the arena. A mirror image of himself appeared twenty paces away from him and began to unlimber its great double bladed axe. Damien tried to enter the fray to help his comrade but an invisible magical barrier prevented him from doing so. Bardan knew he was about to fight himself to the death! The fight didn’t go well initially for Bardan and, upon orders from the cleric, he gave ground until he was in range of a Bless spell, to improve his chances. The magic didn’t enter the arena, but affected the rest of the party cramped into the small entrance way. The fight then turned in Bardan’s favour and he was able to slay his doppelganger. As soon as his double was killed, the body disappeared and Damien and Arken tumbled into the arena. Instantaneously, a double of Damien appeared. This fight would be easier as it was three on one, but Bardan’s wounds needed tending. Damien, however, made short work of his double. The barrier dropped again, and Korum, riding piggy-back on Knil’s shoulders bundled into the arena. A copy of Knil appeared. This fight proved to be long lasting but not many blows actually landed. Finally, a hefty back-stab from the thief and hits from Knil and Damien dispatched the apparition. The portcullis opposite raised and the party were free to continue.


After a quick scout ahead to ascertain any further dangers, Korum reported back on a room filled with comfy beds and food and drink aplenty. Arken, Bardan and Knil decided to stay in the arena to rest and heal up, but Damien and Korum fancied spending some well earned RnR in the comfy room.


The Corridor of Traps


After several hours of rest, the two adventurers in the bedroom awakened fresh as could be. The others knew they had spent their time on a hard arena floor. The door opposite their entrance had been spiked to stop it opening whilst the party took their rest, and it was now down to Korum to do what he did best. He opened the ordinary door, and scouted ahead again. The corridor beyond the door led down a semi-spiral stairway and ended at another heavy metal door with a sovereign icon above it. The door’s handle, this time, was tiny and it was doubtful whether a rope could be tied around it. Korum, whose hands were smallest, attempted to pull on the handle, but rather than the door moving, a lock suddenly appeared. It took all of his skill to open the lock to reveal a long room with lines spaced evenly across the floor dividing it into seven sections. The walls and ceiling were of honeycombed rock and the floor was smooth, compacted earth. Bardan and Damien tied a rope about themselves and then around the Halfling in preparation for the forthcoming ordeals.


Neck hairs bristling with anticipation, Korum skimmed one of his pebbles across the floor where it bounced on several sections and hit the opposite wall with a click. Nothing untoward happened. Cautiously, he entered the room. There was a hissing sound and he dived for the floor, but not before being hit by three darts; as many again whizzing overhead where he was but a moment ago. The poison got to work straight away and he felt his limbs go weak. He knew it wasn’t a fatal poison but he would be weak for a long time. The fighters pulled him out and took him upstairs to the sleeping chamber in the hope that he would heal more quickly.


Knil, the second most nimble of the party quickly stepped across the first section: there was no hiss of launched darts this time. Aware the second section was most probably trapped too, he threw down a gold coin a step away and, as nothing had happened to it, he stepped onto where the coin lay. The floor quickly gave way but Knil was prepared for this as he leapt for the safety of the third section. However, he did not make it. A magical barrier had appeared and he bounced back down the hole that had opened beneath him. He landed with a bump about ten feet down, next to a skeleton with a disarticulated leg. The party were stunned by this and quickly traversed the first section to see what they could do to help. When they got to the edge of the hole that Knil had disappeared down they started laughing as they saw him smashing the skeleton to powder with its own leg. He swore that he had seen it move.


In the hope of keeping the trap open so that no-one else fell down it, the fighters brought down some of the planks from the beds upstairs. This had the desired effect of keeping the trap open, but the magical barrier remained in place. Knil climbed out of the hole and remembering what Korum had done earlier threw a stone. The stone bounced back from the barrier. Pulling up the wooden planks, they allowed the trap door to close and tried skimming the stone again. The stone passed through without hitting the invisible barrier. They decided to make a sort of wooden bridge to get across the trap-door section. Whilst this was being done, Korum had awoken, feeling fully refreshed and returned downstairs to rejoin the party. He had finally worked out what the inscription above the first door in the cavern had said…


“Those who enter do so at their own peril. It is likely you will not return this way. Once you pass however, if you are strong, clever and cunning enough, great riches and fame await.”
Posted by Little Odo at 16:33