﻿These took me forever to finish. Not sure why, but I just lacked the enthusiasm for them for a long time. Maybe it was because I had painted so many legionaries and auxiliary troops in the last year I had just lost the will to do any more, or maybe it was because for the first time in a long time I had used a white undercoat instead of my usual black. Anyway, I got stuck into them this weekend and finished them up late this afternoon.
First up is the legion's top brass - the Aquilifer, a tribune or legate and a Primus Pilus (all are from Warlord Games's range of Early Imperial Romans). These are way too highly ranked for my skirmish set up of a century plus its auxiliaries hidden away on some frontier somewhere, but I guess they could always show their faces in a scenario idea - kidnap/kill the legate type thing. 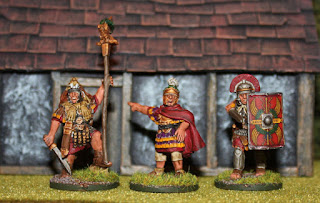 Next up are the top brass of a century - cornicern, centurion and a vexillarius (carrying a vexillum that doesn't have any unit details on it - I decided to keep it blank). 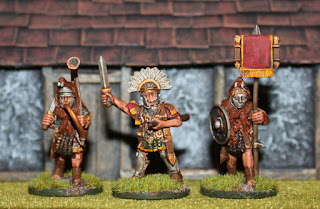 To round out my auxiliary units, I needed an optio for each. Below is the first optio I painted, for the western auxiliary unit of spearmen and archers I have. I stayed with the standard oval shield and chain armour for him. 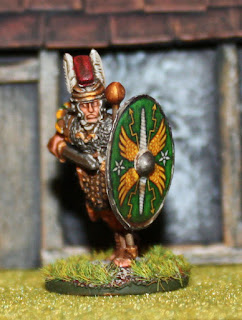 For this chap I decided on a little back story. He was a late transfer to the auxiliaries from a legionary century. Therefore, he is wearing his lorica segmentata and carrying a rectangular scutum. I gave the scutum the unit's shield design, but had to fill up around the transfer as it was an oval decal on an oblong shield. I think it makes a nice change. I have another optio in chain with round shield, but will paint him up to go with the century command above. 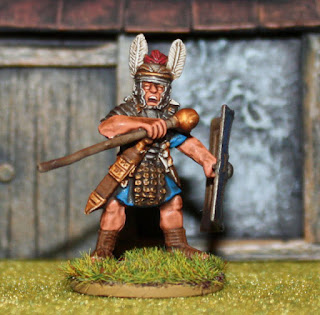 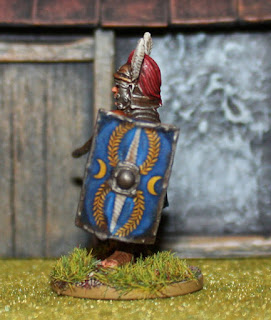 What other Early Imperial Roman stuff do I still have in the painting backlog? Well, I have 2 scorpios and 1 onager with attendant crews, plus a unit of Balearic slingers. I also have a unit of about a dozen Numidian auxiliary cavalry. I think I will add enough Roman cavalry to create a full turma of around 32 men. I may also add some Numidian footmen, Celtic cavalry, a few elephants and a baggage train along with some civilians. I also have a Roman watch tower that I could use as the beginnings of a semi-permanent camp if I can manage to sum up the courage to create some earthworks.
Next up I am painting a few odds and ends of fantasy stuff and I have made a start on my Warriors of Rohan.
Posted by Little Odo at 18:23