The weekend allowed me to finish off quite a few fantasy minis﻿ to the stage where they just need to be varnished or have their bases completed. This is a fairly modern take on the Cleric character class by Reaper Miniatures. I bought him at Colours about two or three years ago on an impulse, with no real use for him. 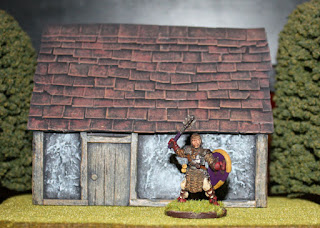 I decided to paint him in a mixture of D&D and Runequest styles; the bronze chain armour being the nod to a standard Runequest character and the iron weaponry and plate a nod to iron shod Rune Priests/Lords. However his look, to me, is far more D&D. I used him as an experimental paint job to see how well the purple and yellow go together. ﻿
This figure is quite a bit bigger than my earlier fantasy minatures, which are all true 25mm. This miniature fits in more with my Runequest minis or later historicals by Gripping Beast. As a result, he needed to go on a 2p coin rather than the usual 1p coin.
I have been using all sorts of basing colours but have yet to settle on a particular colour or style. Eventually when I get to paint an army for use in a game, I will have to settle on a particular colour scheme. I may have to then go back and repaint a few base rims to match further figures in with them.
The next few days should see a few more fantasy figures up on the blog as I finish and photograph them.
Posted by Little Odo at 21:02