This is my oldest shop bought﻿ figure; a Ral Partha Centaur from 1976. I don't remember why I bought him as I had no use for him at the time. I think it was a case of I saw what I thought at the time was a fantastic figure and made an impulse buy; the first of many, I might add. 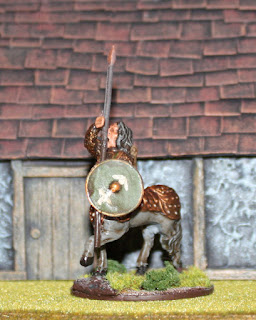 I painted him up for use with Runequest, but the lack of detail meant it was hard to make it look any good. He was originally armed with a sword, but that has gone missing through the mists of time, so I added a heavy spear and a shield from my bits box. I painted a very crude Sagitarius symbol on the shield to match his barbaric origins. I will most probably start using him in SoBH along with some human adventurers to go against the Broo I painted earlier this year before trying to resurrect an old Runequest character (created after the fact I bought the figure so I could get some use out of him!).

I am hoping to finish those Kobolds this weekend and make more headway on the last of my Early Imperial Roman command figures (I am finding these very difficult to summon up any enthusiasm to paint at the moment).
Posted by Little Odo at 08:54