Into the Perilous Realm...

I got down to see Dunc, my new online gaming buddy, this weekend. I packed the chariot with all the requirements for a day's gaming and set off through the Dark Wood into the Perilous Realm of Sussex. My landlubber's legs trembling at the thought of meeting my sea-worthy adversary in mortal combat. The Saxons were invading and the remnants of the Romano-British resistance needed to show they were made of stern stuff.

After a thoroughly warm and friendly greeting at the door of chez Dunc I was ushered into the realm of the lord of battle. We had four smashing games. The first three I was able to roll an absolutely unbelievable amount of sixes (something I am not usually renowned for). However, when the dice went back to resembling normality in our final game, Dunc gave me a sound thrashing with his superior tactics.

Dunc has actually beaten me to the write up of our games here, but I have a few photos and comments of my own to add to his wonderful summaries. I managed to photo (on my Blackberry, so please excuse the poor quality) the Splintered Lands versus Dwarfs match up close to the start and then at the death.

Dunc's Dwarf Hero on a bear charged forward in the hope of mashing up some mouselings cowering in a huddle between the hills and the marsh. My Hare leader ran out to meet him in single combat - ordinarily a foolhardy decision but he thought his troops would back him up. Looking back, he saw the mice cowering together and the otters refusing to enter the marsh - perhaps these aqueous creatures didn't want to get their fur wet? This game saw me roll unbelievably in combat but I failed on numerous occasions to activate - rolling a double fail for something like four turns in a row. If it wasn't for a Transfix cast by the mouse shaman, the Hare (and then the rest of the army) would have been mincemeat, but the constant flow of sixes meant the combat went against the far superior warrior. 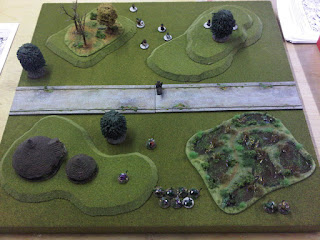 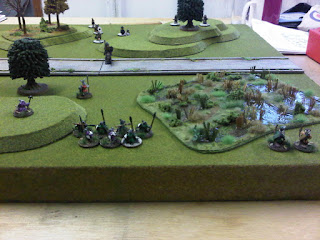 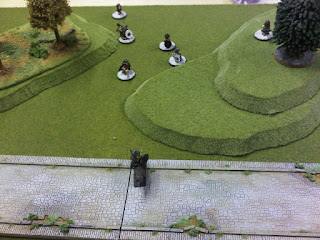 The battle ebbed to and fro, but the Splintered Lands army just managed to cling to a victory.

This was my first foray into the world of Songs of Blades and Heroes, and I can quite honestly say that this set of rules makes for a fun, actioned packed half-an-hour. The four games we had during the afternoon were great and the ruleset made for each being unique.

After the actual gaming, we were both called indoors by Mrs Tangent to a hearty, and most tasty, meal of meatballs (thank you again for your hospitality). Absolutely perfect for rounding off a great day out.

We parted with the promise of more to come. I look forward to it with great anticipation.
Posted by Little Odo at 21:00