Colin managed to get some more of his photos (and text) off to me during the week...
This is the final one of the Russians vs. Prussians game. It shows Russia's Moldavian "Yellow" Hussars before their charge. The photo shows some of the detail including the frogging on their pelisses. I'm sure however that I can take a photo that will better show the paint jobs on my figures.
﻿

"British Grenadiers" - Shows some obsessive detail on the mitres. 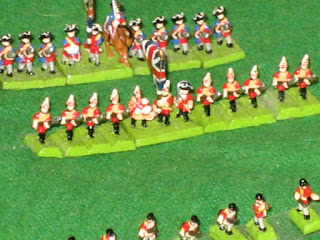 "British in North America" - Shows a closer shot of some of the figures I sent you before, but also includes some Colonial Militia in blue and some Regular Light Infantry. The Light Infantry are actually ACW dismounted cavalry with a dob of glue on their heads to round their kepis and make them look like the correct headwear. 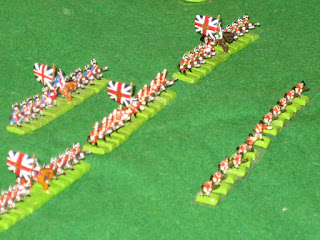 "Canadiens and Allies" - The trees are all metal, of various makes, mostly Irregular Miniatures. I thought I'd mention that as they seem to feature as prominently as the soldiers.

The Habitants and Woodland Indians (probably Mingoes) are entering into combat with the Rangers The Indians are Heroics & Ros. They are led by a Prussian Jaeger painted as a French officer, mostly for identification purposes.

The Coureurs de Bois are a mixture of Heroics & Ros and Irregular Miniatures. The Heroics are mostly Woodland Indians and Jaegers, the latter being subject to more alteration, cutting away equipment. I have left some with tricorns, but others I have styled toques (long wooly hats) from trailing blobs of glue, which I found easier than moulding Milliput at that size. 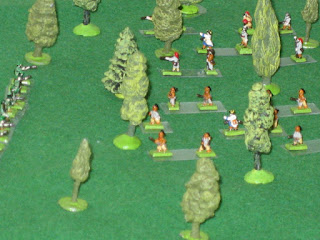 "Rangers" - Shows some colonial rangers. They are made up of a variety of Heroics & Ros figures, including American Woodland Indians, ECW Lowland Scots, and a Prussian Jaeger (he's the one reloading). The musician is an ACW dismounted cavalryman. They have mostly been altered slightly, mostly cutting, but in the case of the Jaeger, by swapping his head with a lowland Scot. 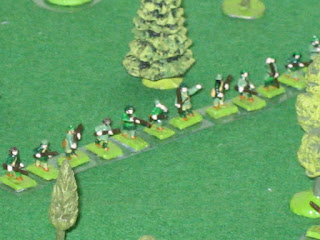 We used to play quite a few 18th Century style games, mostly Sport of Kings, Warfare in the Age of Reason and Wolfe et Montcalme back in the day.

Colin also sent through some write-ups for a few of our old games. I'll try to get them up on the blog after this post too. These pictures and write-ups have brought it all flooding back. We used to play several times a month when we were a lot younger, but as work and other life commitments started to get in the way, along with many people moving away or leaving us entirely, our gaming group slowly reduced from a couple of dozen (inlcuding both the casual and hard-core gamers) to just the half-dozen or so that play PBeMs nowadays. Face-to-face gaming is almost non-existent although we constantly talk about it and always want to get to play. One day, probably when we are all retired, we'll get back to it!
Posted by Little Odo at 11:43