Four posts in one day! It must be a record for me. I have been busy with quite a bit of real life stuff lately, so I haven't had much time to post or paint recently. So, like London buses, you wait for ages and then there are four arriving together.

Alex and I managed to finish off a few miniatures this weekend for our Brytenwalda armies. Going has been a little slow on these this month, but at least some progress has been made. First up is a cavalryman, or marca, with a full face helmet. 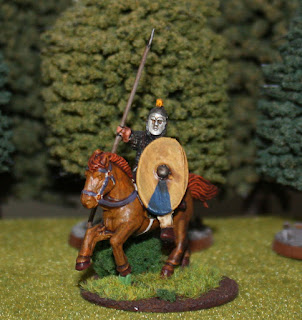 Second up is a standard trooper, painted up with a very Rohan Royal guard theme. I thought about doing the shield designs with a horse motif, but decided against it in the end. I may revisit that idea at a later stage when I do more LotR minis. 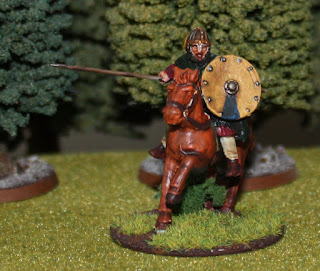 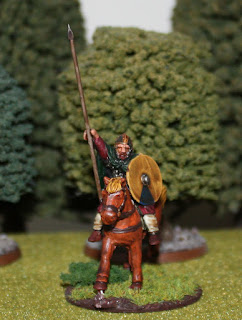 This final shot is of a mini skirmish scene I set up. You can just make out who their enemy is in the bottom left of the picture. It is very much on a LotR theme. 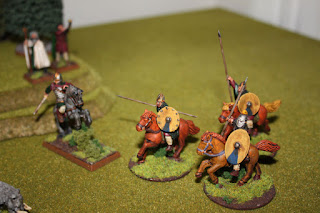 All miniatures are from Gripping Beast's Arthurian collection.

To come in the next few weeks...
More Brytenwalda troops to fill out our armies.
A few fantasy minis for RPG and HotT
I also dug out some old Runequest minis this weekend, which I have cleaned up, rebased and undercoated. They needed a complete repaint though as my old paint job on them was awful, but should be fun to do - I have a small selection of adventurers and the old Citadel Broo box set
Posted by Little Odo at 15:51