I managed to finish the command part of the Roman Auxiliary Spear unit this weekend. I haven't been able to buy the matt spray yet, but was able to eke out a last huzzah from the can that died on me last week. Anyway, here is the command section - a centurion, cornicern and signifer from Warlord Games' Early Imperial Roman range. 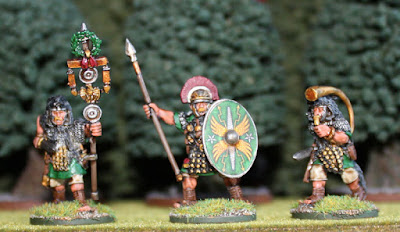 I also managed to photograph the entire unit, including the legate bringing up the rear. I really need to get a new photo 'studio' sorted out. Things have improved greatly since I first started out on the blog, but now I feel I need to push things a bit more.

Next up will be one of any of the following: a couple of early Space Marines, a couple of stands of Numidian cavalry to be used as HotT barbarian riders, some Celts and a few fantasy figures. However, none will go up until I get some more varnish, so it may be a week or two before the next photo goes up on the blog.
This weekend I was busy again down at the Kent Archaeological Field School. I was looking at bones and burials this time. I was there for two days looking at various Medieval and Iron Age/Roman skeletons and skulls and learning how to determine age, sex & gender (yes they are different things) and how to recognise the ways in which disease manifests itself in the skeletal system. It was a fantastic two days and I learned a heck of a lot. That should be the lot for my archaeological outings this year though as the season is rapidly drawing to a close.
Posted by Little Odo at 18:31