Last of the Roman Auxiliary Spearmen

Today turned out to be a good day for painting. I managed to finish off the last of the Western Roman Auxiliary Spearmen; just the command unit to go to complete this particular unit now. I can then get started on the Eastern Auxiliary Spearmen - basically, exactly the same minis but a different paint job: blue rather than green. To set that unit apart though, they will be supported by some Eastern archers that are different minis to the Western archers. All of these minis are made by Warlord Games. Once I have completed all of the Warlord stuff, I'll look for gaps in the collection and see about filling them from other manufacturers. I have seen some lovely Foundry figures but they are a bit pricey. Can anyone out there recommend any other companies for Early Imperial Romans - elephants, baggage trains and dignitaries especially. 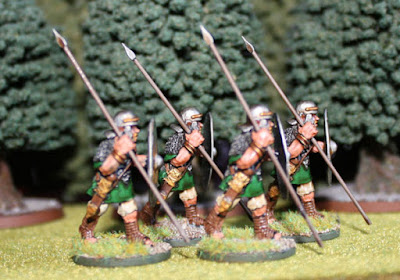 After completing these Roman figures I finished off all of the Games Workshop Lord of the Rings Riders of Rohan cavalry horses. I just need to start on the riders now.

I also managed to complete two stands of Numidian cavalry for use as Riders with my Hordes of the Things barbarian army. Unfortunately my spray varnish spluttered out on me so I have to buy a new can. This means I may not be able to put up any pictures over the next week or two.

I was also able to put the finishing touches to another 15 Warlord Games' plastic Celts. These now just need spray varnishing like the Numidians.

On top of these I was able to complete the first couple of Space Marines painted up for use as Justice Department heavies. I am not sure what to do with these shading and varnish wise, so may just leave as block colours and put matt varnish over them. This will mean a lack of shading, but this could be achieved by using a few of GW's new washes I suppose. I'll make my mind up next weekend.

Finally, I started work on four old Citadel Fighter miniatures. I only got a couple of colours on, but they are coming along nicely. I have been going through my old RPG collection from the 1970s/80s, stripping them down and then repainting them. I still have several hundred to go, but the numbers are reducing at a fair rate.

The following seems to happen to me quite often when painting; I'll have several small units on the go over a period of time and just when I start to get really bored of them, a couple more colours finishes great swathes of them. Once I get the spray varnish, I should have quite a few to go up on the site. I am also crawling ever so slowly towards completing armies/units for various gaming systems. Hopefully I should be able to play with my painted toy soldiers before the year is out.
Posted by Little Odo at 19:18