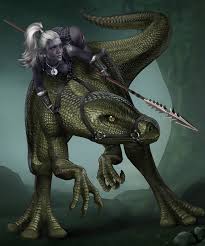 For this session, our Elf Rogue player was absent, so we assumed he would just rest up at the inn when we arrived in town.

When we looked around to confirm the presence of the handmaiden of Baba Yaga we noticed that she was no longer with us. Neither was the carriage she was held in, nor the horse that drew it. All we could see for miles around was rolling fields and countryside. Confused, we made our excuses and said our goodbyes to the village gossip and headed into the village to find the Tortured Soul Inn.

After ordering a few ales and a room for the night we mingled with the small crowd in the common room. A variety of rumours concerning certain members of the community abounded and we discovered that the name of the inn was a bit of a misnomer after hearing an extremely boring story about a fish that was pulled out of the river and being manhandled. The idea of a paid job to track down and return a unicorn from the dark forest nearby was a rather welcome request, although the counter rumour that there were ancient reptiles in the woods did make us wary. We also heard that the local priest held evening poetry sessions for the village children and that it was likely the place was infested with vampires. We decided to investigate these rumours in order.

On the way to the dark woods we decided to take a look at the supposed vampire lair (locked up) and the priest’s home in the mill. Upon entering the mill we were struck with an overwhelming sense of dread. Hanging from the rafters was the body of father Carlinious and gloating from the upper storey walkway was Lord Frak, the anti-paladin. After listening to his monologue Grumbold offered to face him down mano-a-mano but the dopey paladin fell upon his own sword and plunged to the floor. I gave the body a cursory kick, expecting it to be an illusion but the body felt quite solid. “Fool!” I thought before the body collapsed in upon itself and disappeared completely.

After we had hidden the priest’s body, to prevent a cry of murder against us, we resolved to return later to give him a decent burial. We headed out to the distant forest and spent a fruitless couple of hours searching for the Unicorn (a couple of members of the party mentioned that perhaps relying on a half-orc virgin as a lure was a bit much to expect?) but eventually spotted our quarry. Millie went off on her own to track down the beast whilst the rest of us kept our distance. We thought Millie was on her way back crashing through the trees and undergrowth but the long legged lizards with Drow riders soon put paid to our reverie. A couple of Fireballs and other Magical Missiles later and the scout party was down – wizardly leader and all.

Millie must have heard the commotion as she appeared in our small glade to land the final blow against the Drow enemy. After we had tended our wounds, Millie went looking for the unicorn again. She managed to find it relatively quickly but when she led it over to us we realised it was just a horse with a cleverly stuck on horn. I think also, the bridles, straps and other carnival paraphernalia gave it away that this was not a real creature from myth. Still, 10 gold pieces is not to be sniffed at, as it would pay our bar bill and lodgings for the night.

We returned to the village, claimed our reward for the delivery of the horse and then settled into a refreshing bath to ease away the stresses and strains of the last couple of weeks. We had a fine repast and then made ready to investigate the supposed vampire lair.