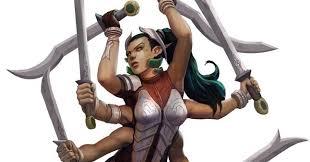 Of all the sneaky things to set before us – the water was an illusion. How I did not realise that it was making no noise as it flowed and my staff came out dry when placed within it I do not know. Brother Bertrand broke the spell for us by falling down the empty well and confirming that there was nothing in the pit below the illusion except a nasty fall.

After we had hauled Brother Bertrand from the pit we decided to squeeze (well, the bigger people did, I just walked through normally) through the bars at the entrance to the room with the great grinding cogs. It wasn’t until we were halfway across the room that the trap sprung – an air elemental took shape and proceeded to pound us with blasts of wind. Whilst the others bothered themselves with trying to fight it off, I explored the two other sets of bars in the hope of finding some way of defeating the summoned critter. Beyond one set were some stairs that led upwards towards a door whilst the other led into a room with a large pentangle on the floor and a couple of dressers at the sides of the room. It was whilst rummaging through the dressers that the first air elemental must have been defeated in the main cog room as another sprang into life from the pentangle on the floor whilst I was right before it! I was flung against the far wall and barely made it out with my life. My companions had used the interlude to make good their escape.

At the top of the stairs we passed through a wooden door into a huge cavern of unworked stone. This was mentioned in one of the dire monologues I received when I happened to glance into the magical Book of Knowledge earlier today; the complex was originally made by elves but not completed, and there was one hall in particular that was mentioned as being of uncut stone.

Well, we were about to find out why the room remained uncut. As we proceeded through the cavern, past huge stalactites and stalagmites and massive outcroppings of rock we began to hear sibilance and a whispering voice accompanied by the rather peculiar whiff of sulphur.

Finally, the being that owned said stench and voice hove into view. She (?), well it looked like a she, but who can tell with demonic beings, was huge with six arms and the lower body of an enormous snake. Knowing that it must be some abyssal creature I was aware that much of my magical arsenal would be useless against her, so I had to sculpt my Magic Missile spell into a more potent form. Whilst the two fighters went toe-to-toe with the monster, our cleric and rogue took pot-shots from afar whilst I poured on what magical damage I could muster.

The fight did not go well for us though as Brother Bertrand, in a brave but rash move, cursed her and fell to her six swords and crushing tail. This magical hindrance, however, gave us all time to redouble our efforts in order to take her down. Unfortunately she was much swifter than most of us and was able to do the same to Malfeseus.

Millie continued to hack away with all her strength whilst Grumbold used whatever gods-given aid he could muster. Eventually, my magical outpourings must have caused the demon much harm as she finally fell to Grumbold’s coup de grace (now where does that saying come from? It is not from any language I am aware of – maybe it has slipped through from another dimension where strange foods are eaten at tables where people play games with dice, and magic does not exist?).

In the aftermath of the battle, Grumbold was able to summon up some energy from a magical stone. I didn’t really see what he was doing but both Brother Bertrand and Malfeseus were restored to life, yahoo, yahey!

After we had rested for a short period, we made our way deeper into the caverns and came across four pillars with runes upon them that stood before an altar with a chest upon it surrounded by a swirling maelstrom of magic. However, a piece of parchment we had gained earlier had some clues that matched the carved depictions upon the pillars. After a few attempts at getting things lined up, for the pillars were made up of segments that could turn, I got the correct combination and the magical maelstrom disappeared.

Contained within the casket were many wondrous items that would need to be divvied up amongst the party, as well as a gruesome hand; we surmised it was part one of the three parts of Kaga-Ra’s dispersed body parts.