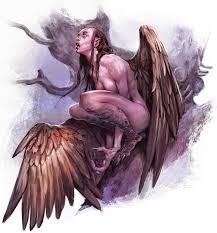 It was during Grumbold’s watch that strange happenings began. I was fast asleep at the time but from what I was told after the encounter, the two ladies in the party (Annabella and Millie) just got up and walked out of the magical protection of my hut. Grumbold most likely assumed that they were off on a comfort break amongst the bushes as they headed off, presumably for privacy’s sake, in different directions and were soon cut off from sight, but it was only after he heard the war cries of Millie and the screams for help from Annabella that he decided to stumble into action. He began by awakening other members of the party and then rushed outside to see what was happening.

I was the last to be awoken but I very quickly sprang into action. It was dark outside but my night vision allowed me to catch a glimpse of what was happening. Two winged beats with the upper visages of people and lower bodies of birds seemed to be trying to carry off my companions whilst singing a song of enchantment. A swift Lightning Bolt made one of the horrors think again about singing and attacking Annabella and the bear, but the sounds of fierce combat came from my right with renewed vigour, so I was drawn in that direction.

When I got closer, I noticed that the harpy, for that is what the vile creature was, I had scorched earlier was now attacking Millie and Grumbold. Malfeseus attempted to shoot the winged beasts when the opportunity arose and Bernard sought out the best way he could help; he headed off to aid the lady Annabella as it looked like the rest of us had the other combat under control. Millie was having a bad time of it and looked like she had taken a few scratches form the wicked talons upon the harpies’ bird-like feet but Grumbold could not hit a thing. So, yet again, it was down to me to rescue my comrades. Another Lightning Bolt and an Acid Arrow soon put paid to the last of the flying carrion.

After checking over our wounds, we slept the remainder of the night quite peacefully; even Grumbold seemed a little more refreshed when he awoke the next day.

The following day saw us arrive at the steadfast known as Pureforge. Upon arrival we were confronted with twenty foot high palisades and guard towers. We were challenged by an uppity Protector named Titus, but after arguing the toss about coming in as we wanted to help rather than attack them we were finally allowed to enter, as long as we left the bodies of the two harpies outside. Our gratitude was extended to Elias, the governor of the town who over-ruled his guardsman.

Upon entering we noticed that the large interior was split into what looked like four sections; a place to grow crops, an area that seemed to have guardsmen practicing and patrolling, another area that seemed to house people building things and an internal area that was palisaded off. There was also a central hall that dwarfed all other buildings within the compound. What was unusual was that we could see no women or children; only men with some kind of markings on their faces, a different pattern for each sector.

Elias took us into the central hut and told us a little about the way things were set up in Pureforge. He had arrived, by planes walking, several years ago to a place in turmoil and was eventually promoted by dint of his wisdom to set up the current scheme. The men did all the work but were not allowed to mix outside of their caste, hence the facial tattoos. If inter-caste fraternisation took place then banishment was the only option for the perpetrators. This was the only way to protect the village and to stop the free-for-all that existed before he arrived from reoccurring, apparently.

The stockaded area within the town walls contained two of the five castes; the Architects and the Breeders (women). It seems that Elias arrived at Pureforge by planes walking as previously stated but he did it with the aid of a device; a device that was stockade behind the internal palisade within the Architects’ quarter. Outside the stockade, but within the town walls were the Builders, the Feeders and the Protectors. This seemed to me to be a bit of an unusual set up. Why the segregation and such harsh punishments for such lowly “crimes”? Something did not feel right in Kansas.

Anyway, after going on about how wonderful things were here in Pureforge since he had set up the new system, Elias invited us to stay one night but we would then have to move on unless we wanted to join one of the factions. He said that he would meet us for dinner later that evening in the central hut but until then we were free to go to the building that we would call home that night.

Not content to sit on our hands we all popped out in the pretence that we wanted to see what it would be like if we accepted Elias’s offer and stayed in the town to live. We visited all of the sectors except the Architects and Breeders sector behind the internal palisade and gathered all sorts of rumours. Many of the people seemed to be unhappy with their lot and tension was rife; a powder keg that could blow with just the tiniest of sparks.

After being stood up by Elias for our dinner date, we grabbed some food anyway and, after giving the central hall a once over based upon the rumours we gathered that something was untoward there, we headed back to our abode. We were sure that something occurred in the central hut but as we could not find anything when investigating there we had to content ourselves with speculation.

Malfeseus decided that as he was the most agile amongst us, he would investigate what went on behind the palisade that night. He was protected by a spell from Brother Bernard and a variety of other magicks and set off on his way. When he reported back to us just under an hour later he told a tale of woe that he had gathered from Mary, previously Matron of Baldor, whom we knew about from a letter contained within the ivory casket Malfeseus and I had found. She told him that the women were kept against their will to provide children for sacrifice to keep the town safe from incursions by Baba Yaga and her with minions. Now I know for sure that this place is rotten to the core and something needs to be done about it.